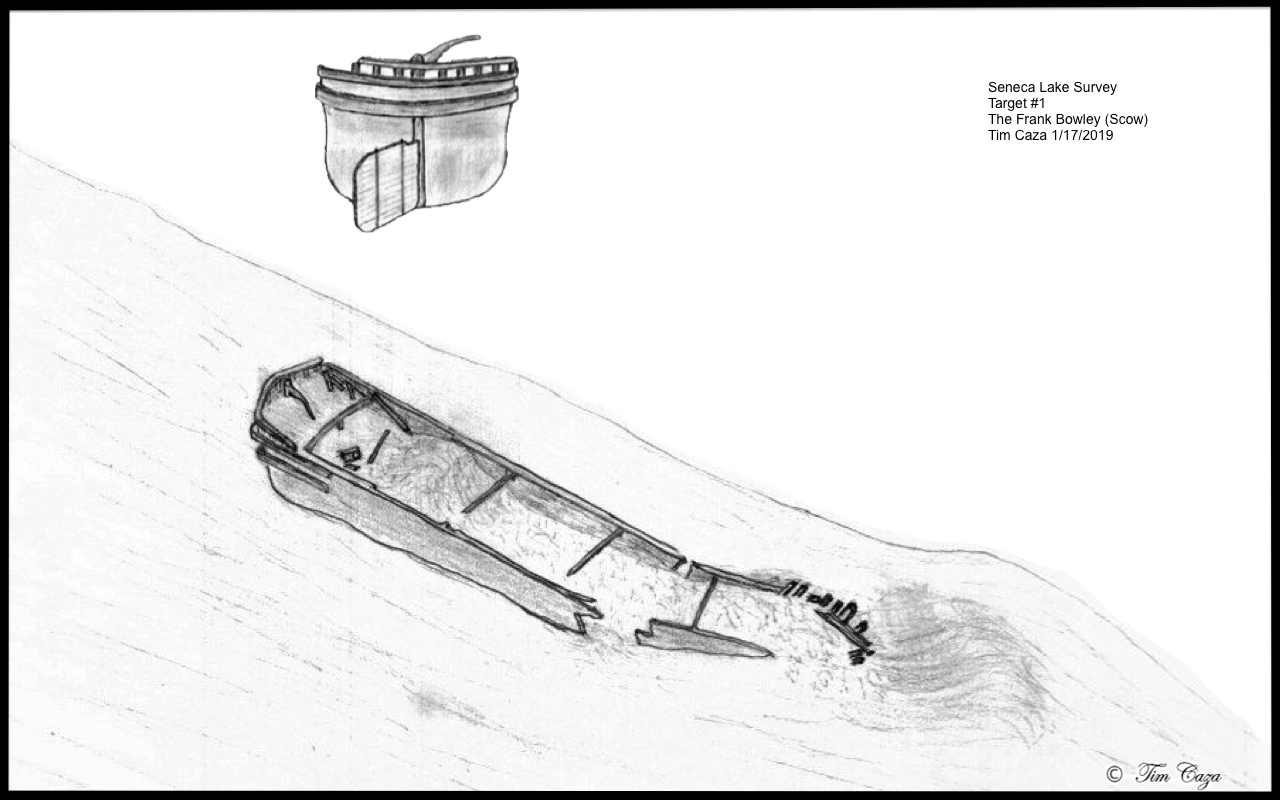 The wreck of the Frank Bowley

Tim Caza and Dennis Gerber found the Frank Bowley on July 11, 2018.  An open scow of 180 tons, built in 1865. The owners paid $2,000 for the scow in 1868. She set out on the first trip of the season with 220 tons of coal on Seneca Lake with eight boats in tow by the tug A.L. Griffin. It would prove to be her first and last trip. One of the howsers broke and she shipped two of three heavy waves and sunk. The bow was damaged when the vessel struck the lake bottom. She now lies on a steep slope on the bottom of the lake.More 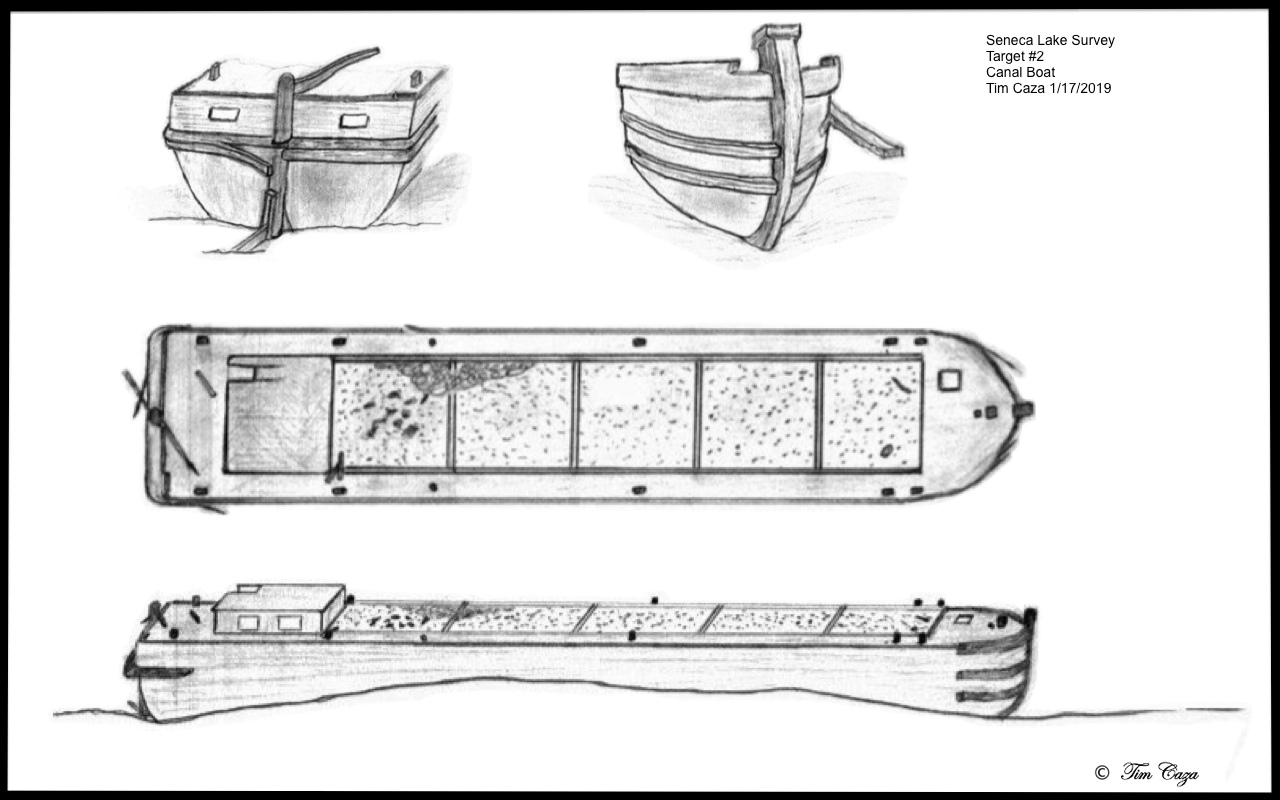 On the second day of the sonar survey we were forced to a different area of the lake due to bad weather.  In doing so we located this canal boat on July 12, 2018.  The vessel is totally intact with a full cargo of coal aboard. She sets upright on the bottom of the lake with a cabin on her stern. 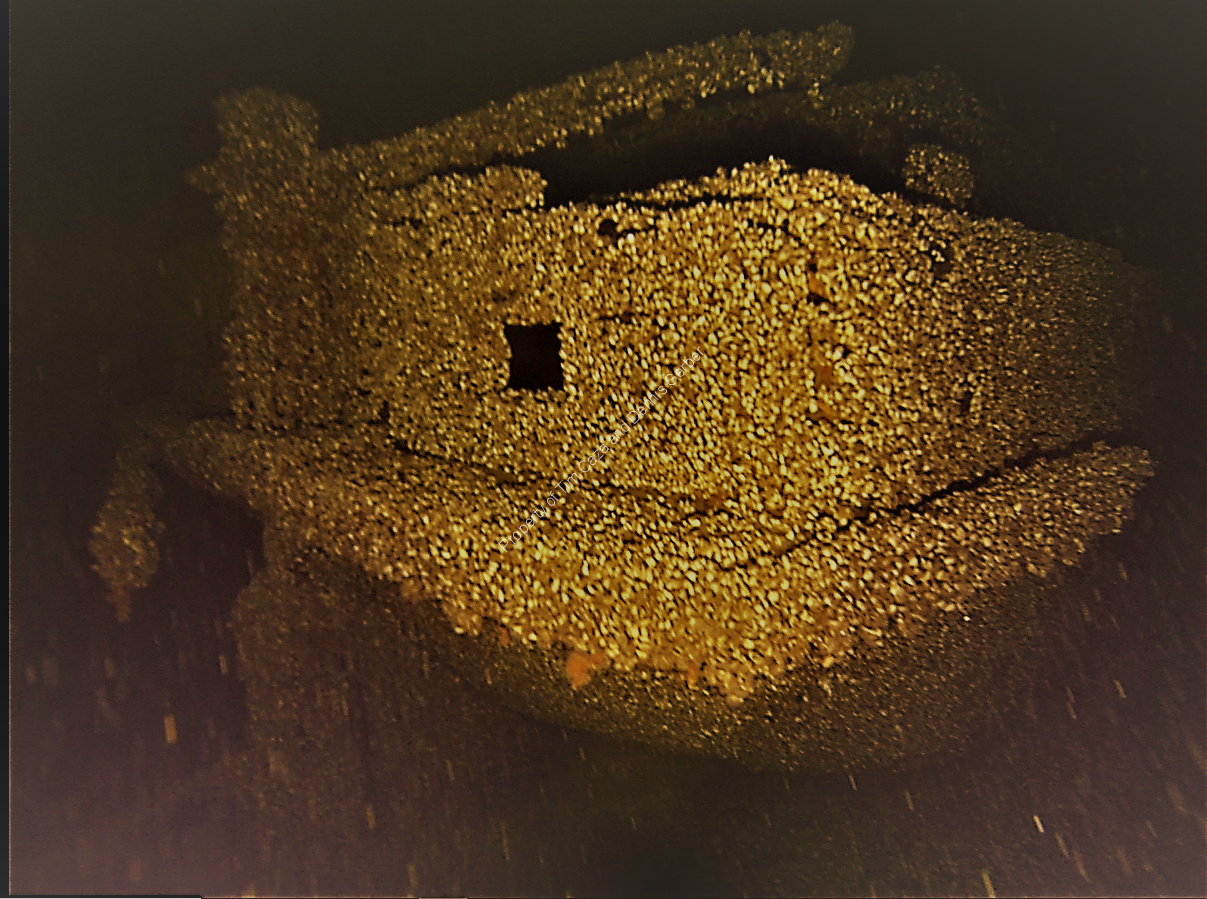 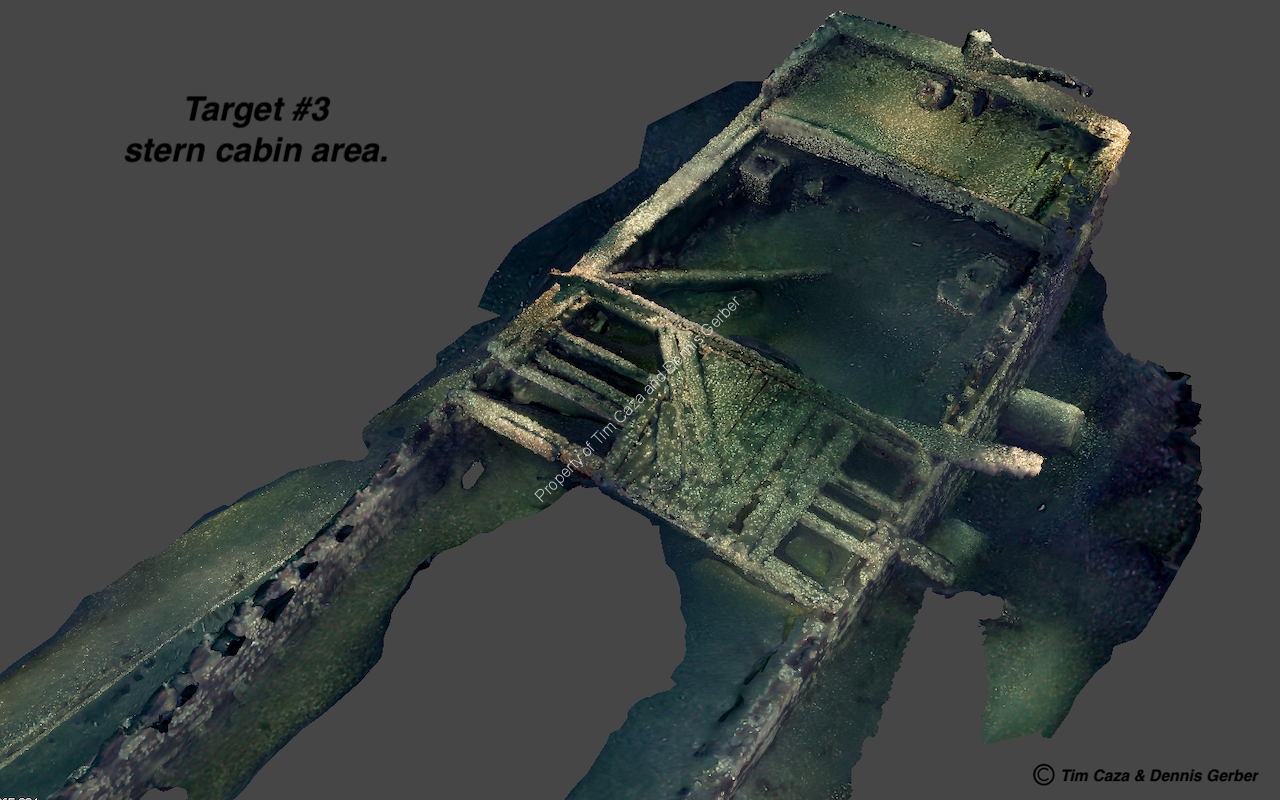 This scow was also located on the second day of our survey on July 12, 2018.  She is intact with a cook stove aboard and a cast iron pot on her stern deck.  She sets upright on the bottom of the lake encrusted in mussels. It is very rare to find a scow in such good condition. This scow also has 2 wood barrels outside her port side and one inside on the starboard side. 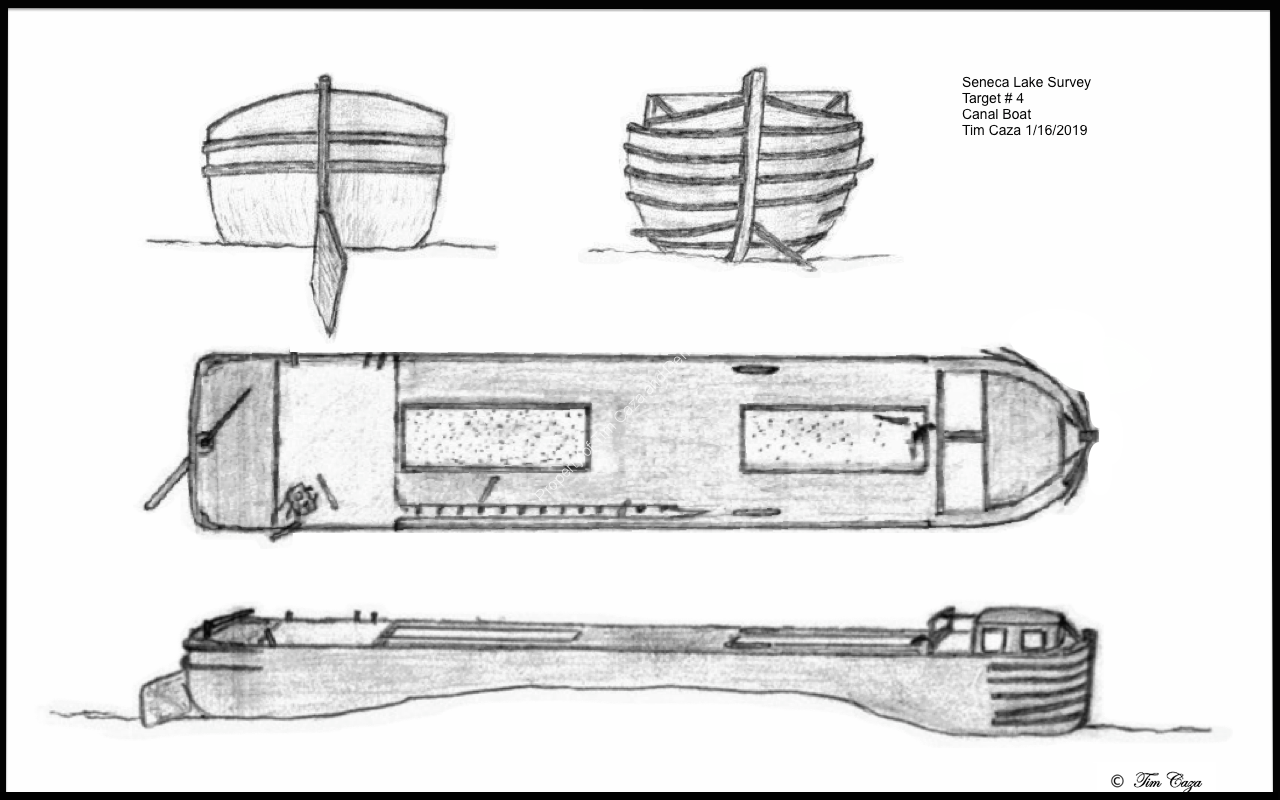 We were doing a sonar survey on Sept. 4, 2018 and at 2:30 am we found this canal boat. She has a horse cabin on the bow with the rope still stretched across the cabin for the horses.  The cabin on the stern was gone, other than that it is intact.  Her cargo is coal, she has a stove in the stern and a large ship anchor hanging on the rail behind the horse cabin. 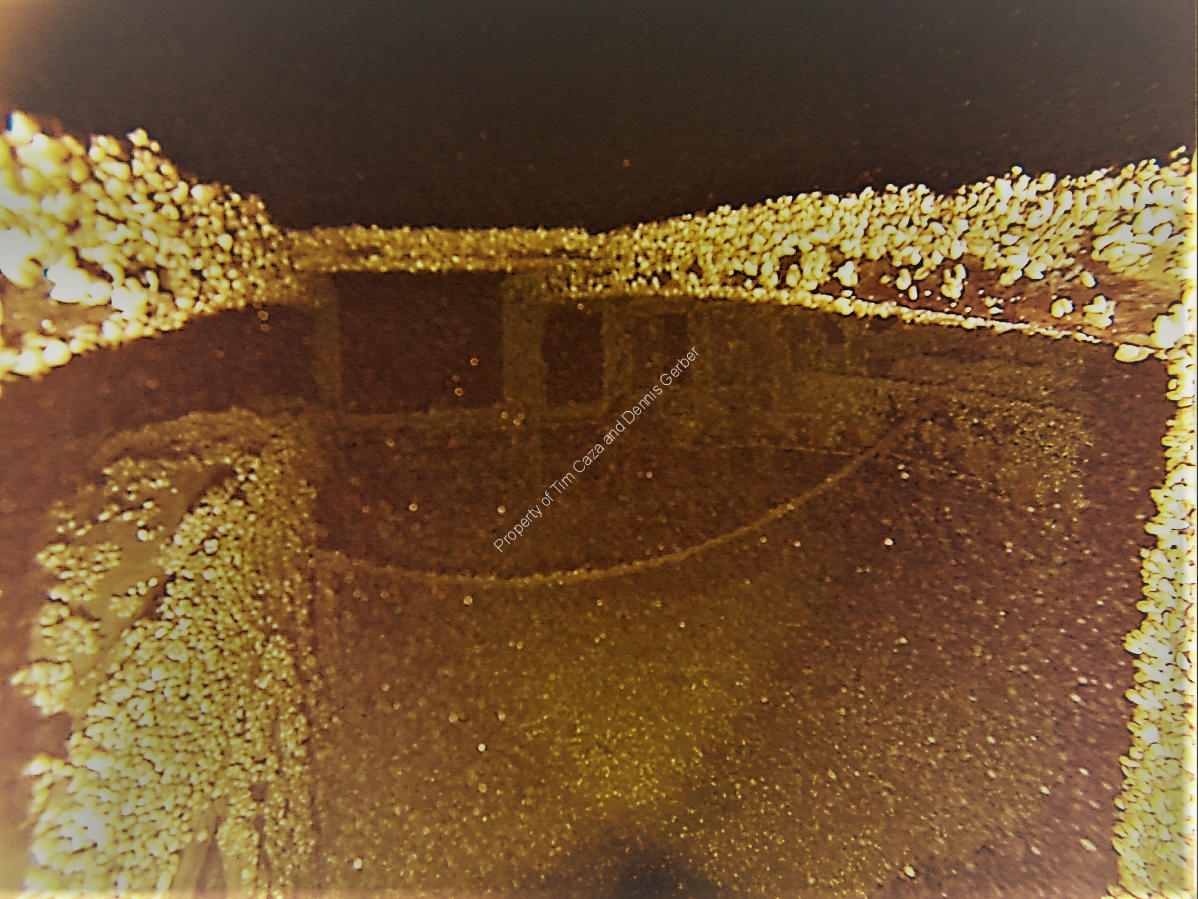 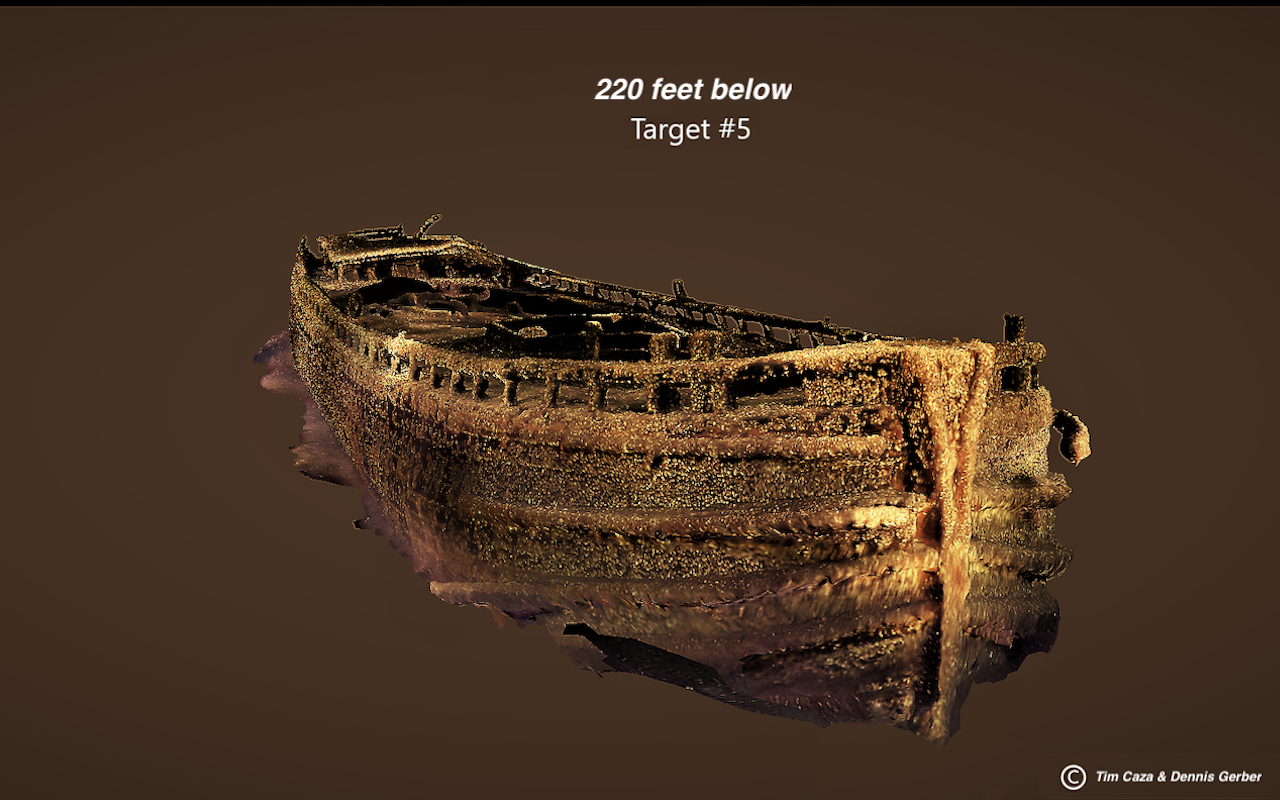 When we did the sonar survey on Sept. 4, 2018 we also found what appears to be a sailing canal boat in deep waters of Seneca Lake.  This vessel has a full cabin on the stern and it appeared to have had a cabin on the bow at one time. Really nice looking wreck and in great shape.  She sets on a hard bottom upright and her cargo is coal. 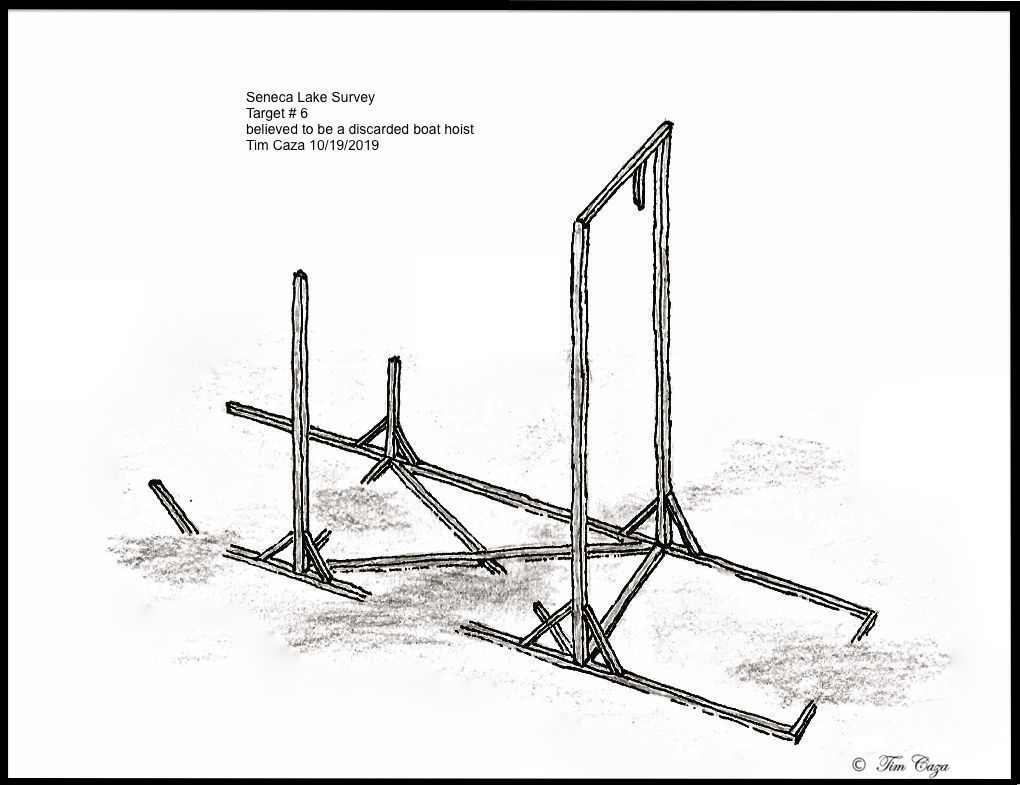 You never know what you’ll find beneath the waves.  This discovery was found in deep waters of Seneca Lake, standing almost 20 feet off the bottom.  Its origin remained a mystery until 2019 when we returned with an underwater ROV.  We can now say that we believe it is a discarded boat hoist that has outlived its use. 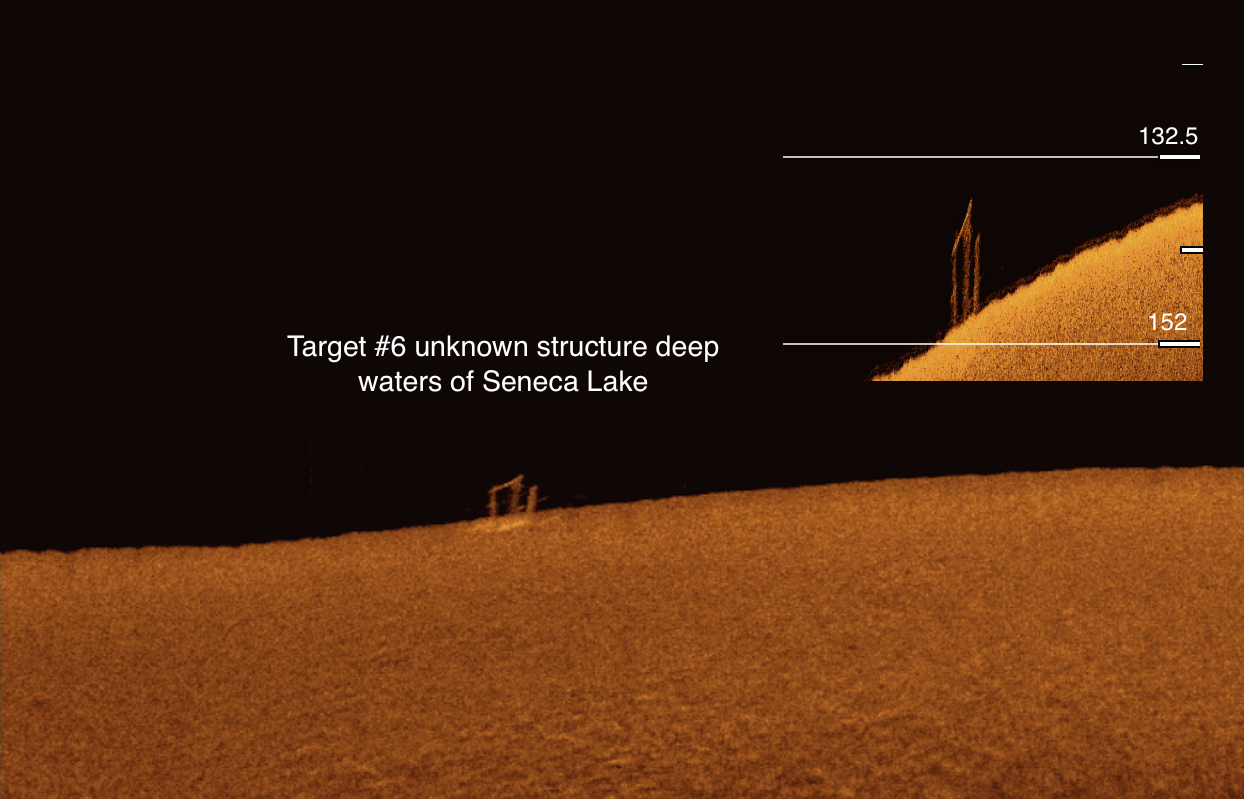 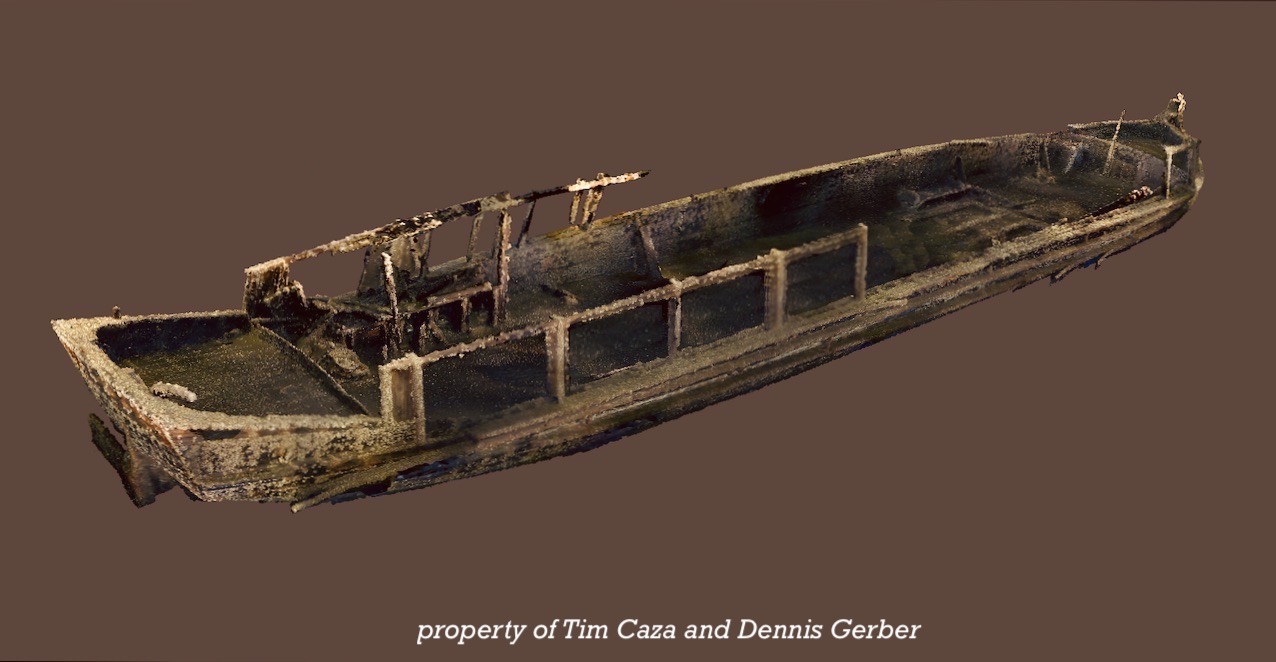 Target # 7 discovered on Oct. 26, 2018 by Tim Caza and Dennis Gerber.  Time and weather did not permit us to examine the site in 2018.  We returned to the site in July of 2019 with our ROV to explore this discovery.  Much to our surprise, we have found a Packet Boat.  This is the first remains of a Packet Boat ever found. 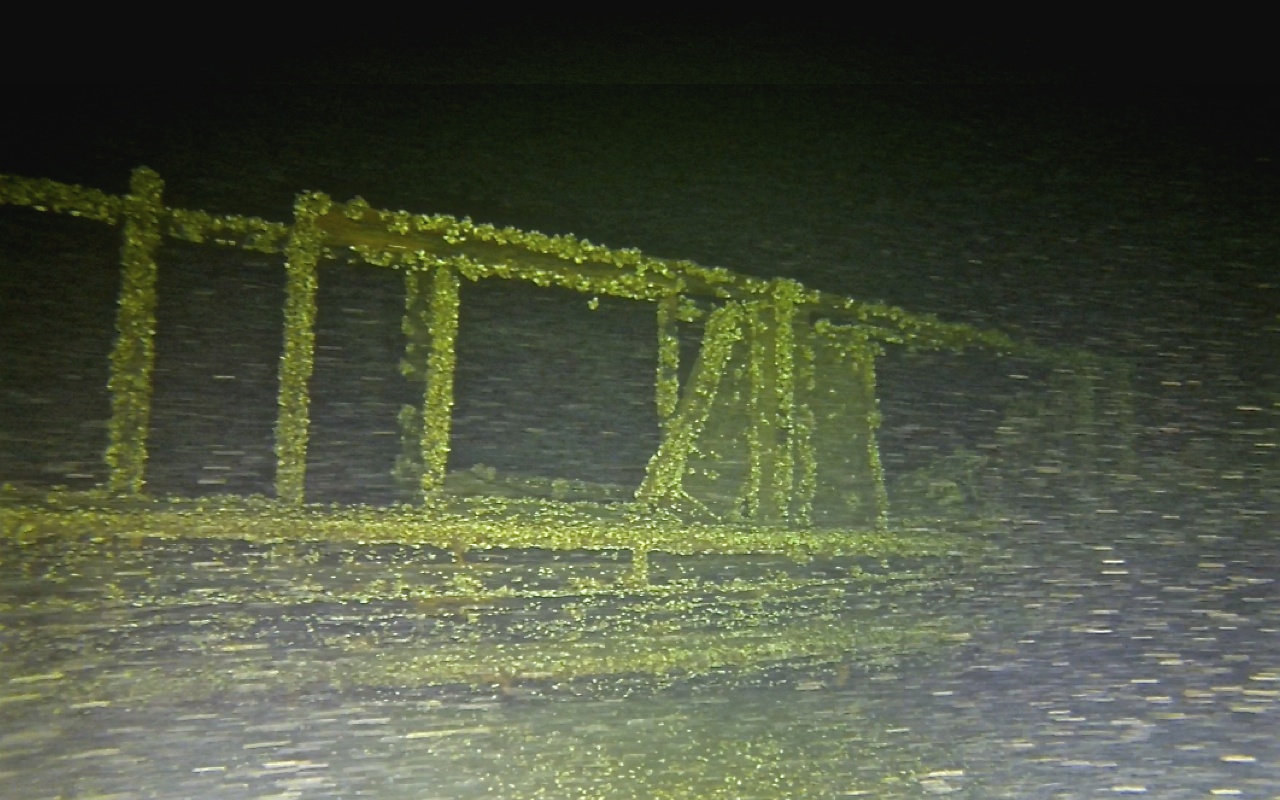 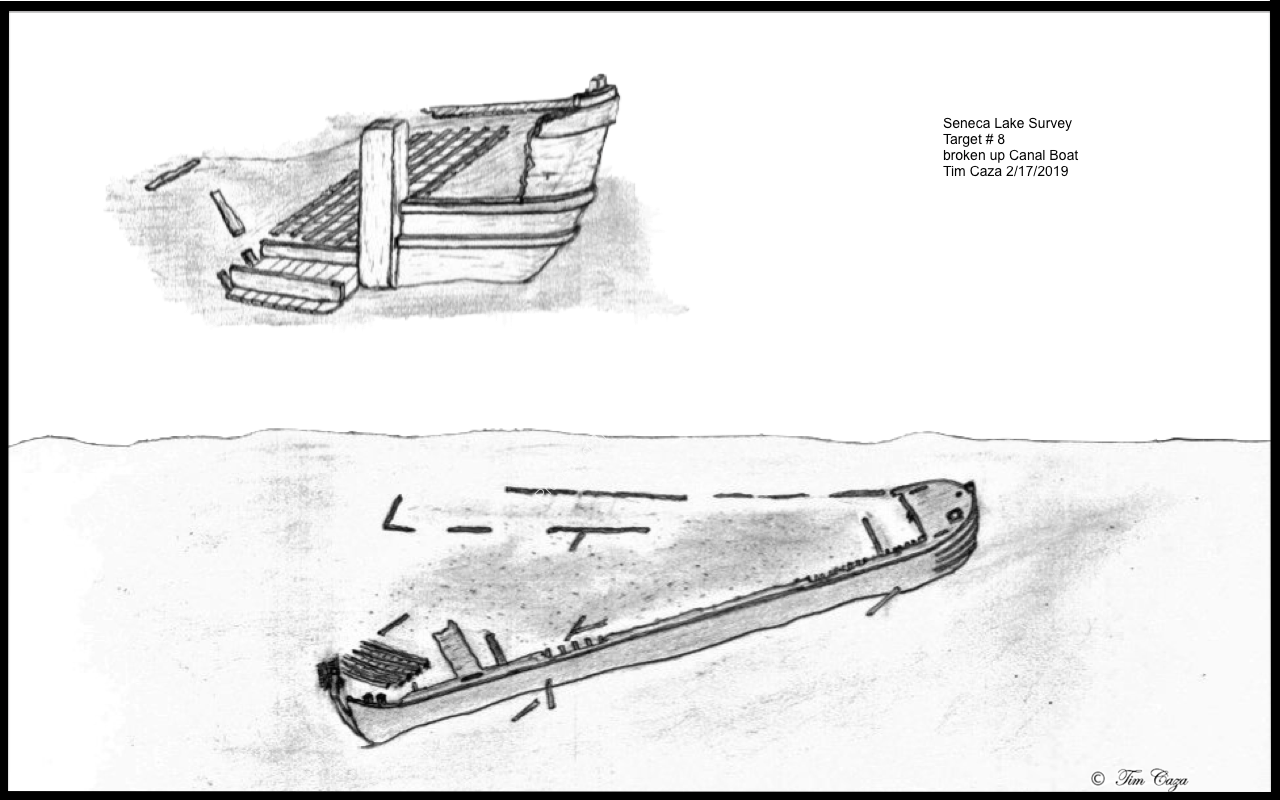 We went out to video target #2 and #3 on Oct. 4th of 2018, after videoing target #2 we had to let the ROV charge up.  We decided to sonar before videoing target #3.  While running the sonar equipment we located 2 more targets.  Target #8 was badly broken up with the port side of the canal boat pulled apart.  Most likely the cargo of coal shifted when the vessel struck the bottom of the lake. 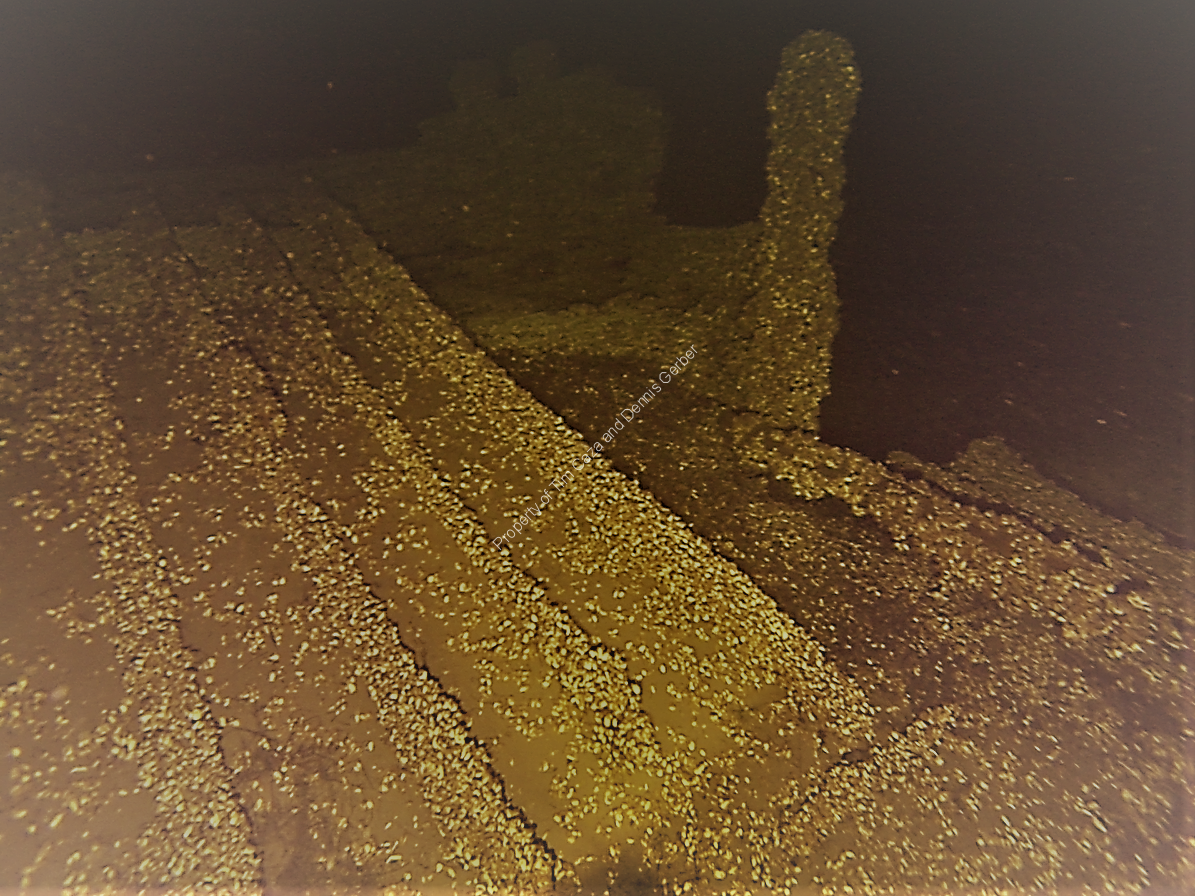 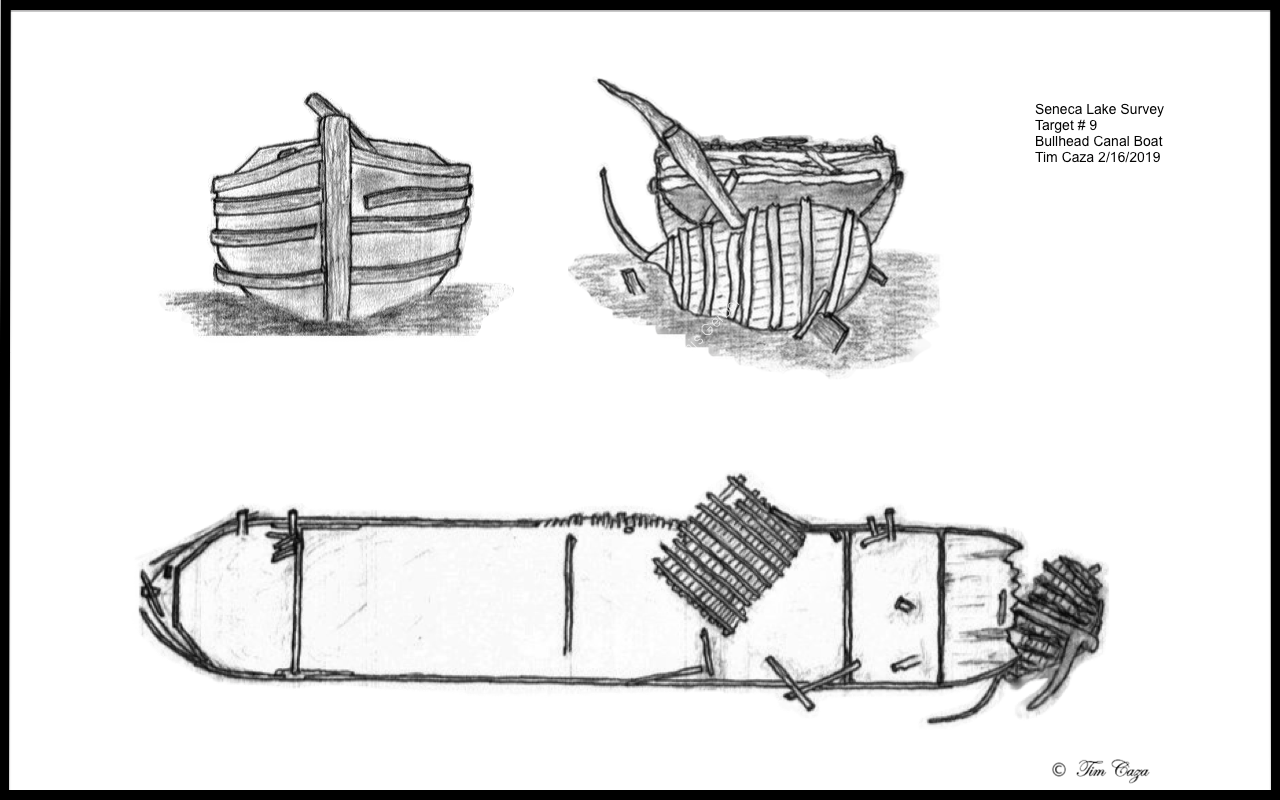 After videoing targets 2 and 3 it was getting dark, so we decided to video target #9 before calling it a night.  Target #9 has all the characteristics of a Bullhead Canal Boat. The stern of the vessel is pulled apart, it probably struck the bottom of the lake stern first. The cargo is coal and it is mostly intact with the cabin missing. 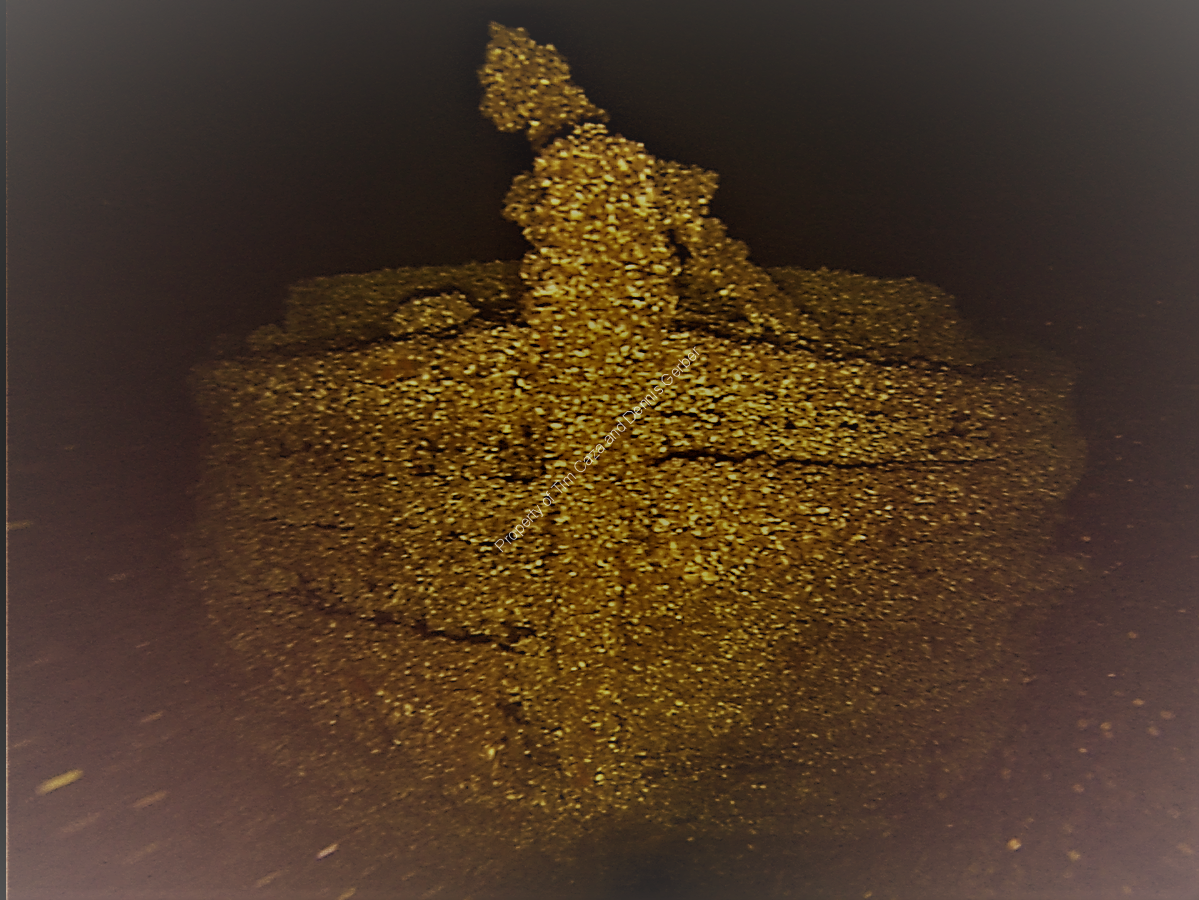 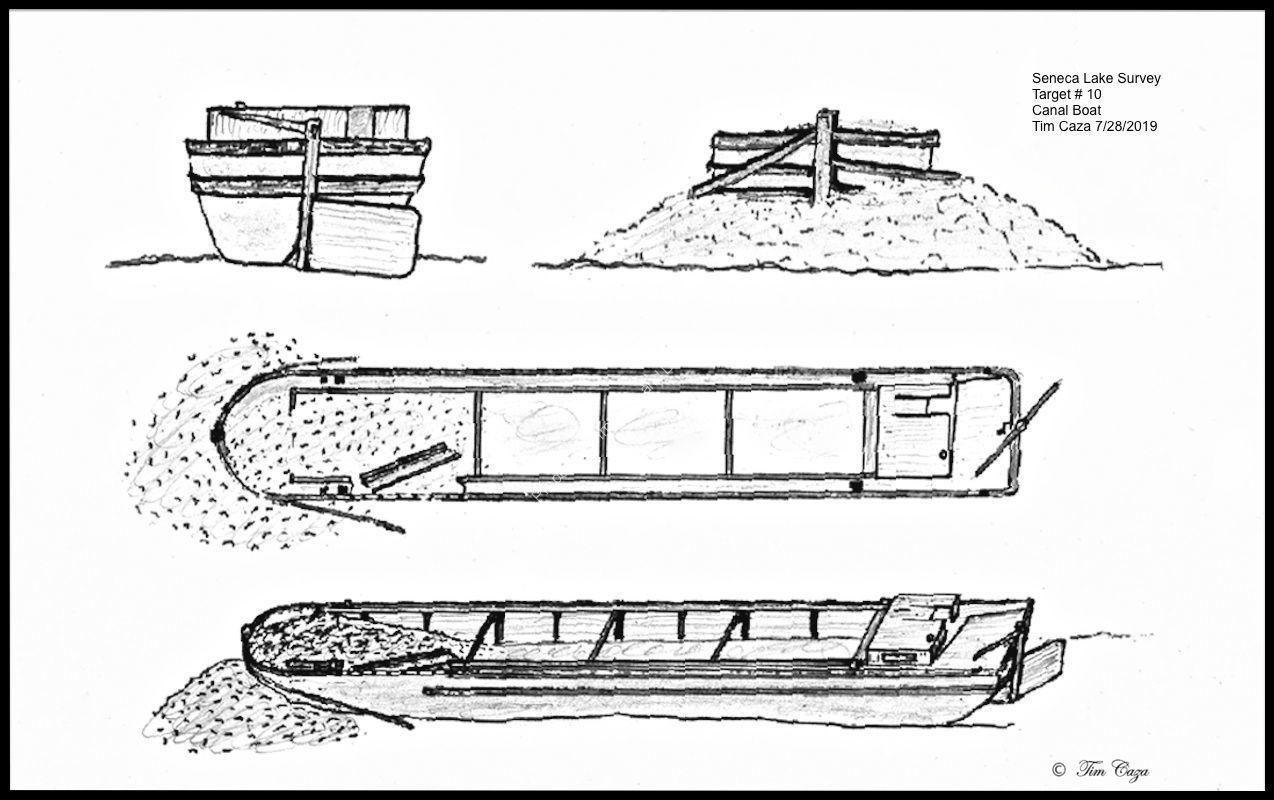 We came across this canal boat in July of 2019.  It is much smaller than all the other canal boats we have located.  It is believed to be one of the earlier style class canal boats.  She was carrying a cargo of coal and appears to have sunk bow first.  When we explored this site, we noted that all the cargo of coal had shifted from the stern to the bow, then spilling over her bow when she struck the bottom of the lake. 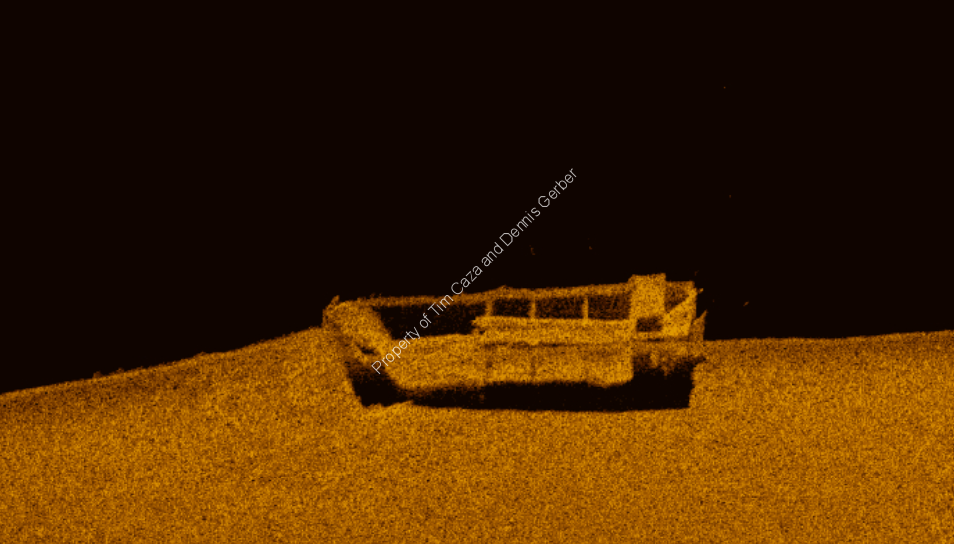 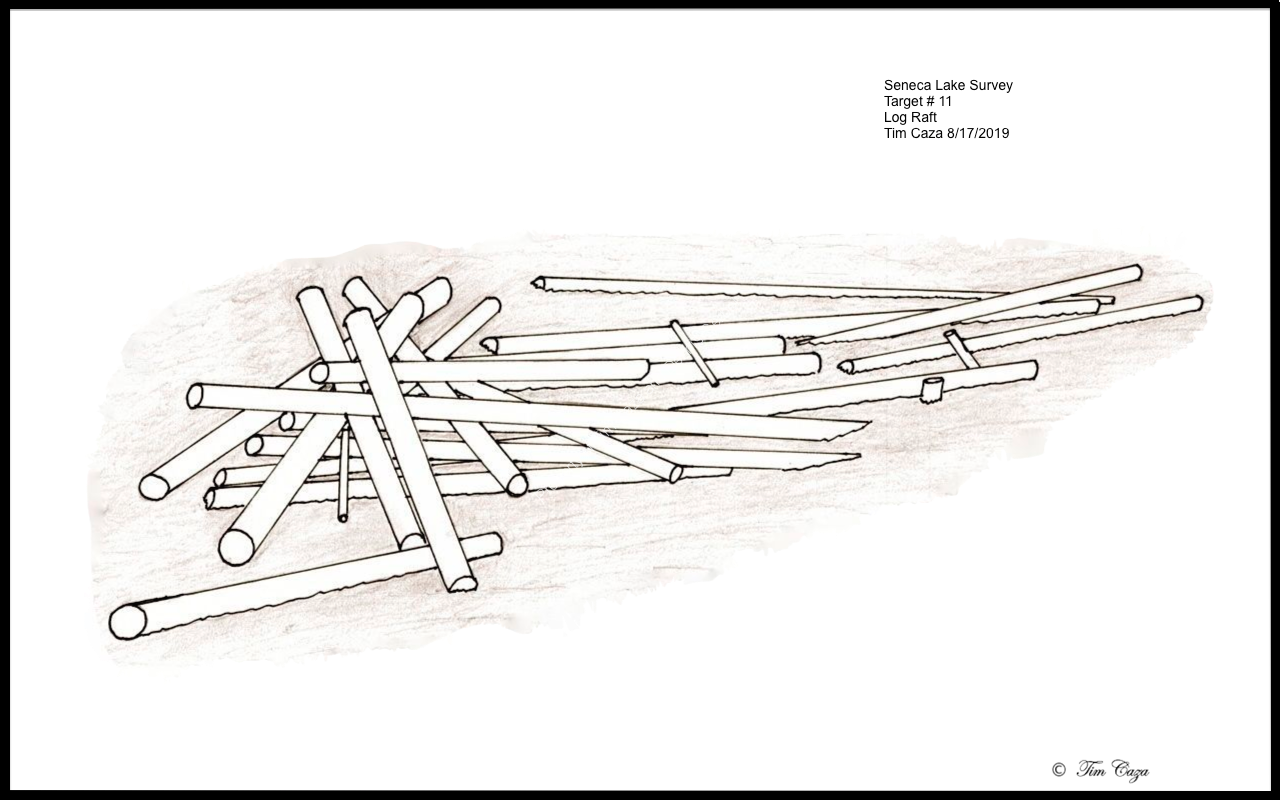 The remains of this log raft was a unique discovery in July of 2019.  Many of the logs are still visible that are not buried in the sediment of the lake.  They remain today in very deep waters of Seneca Lake 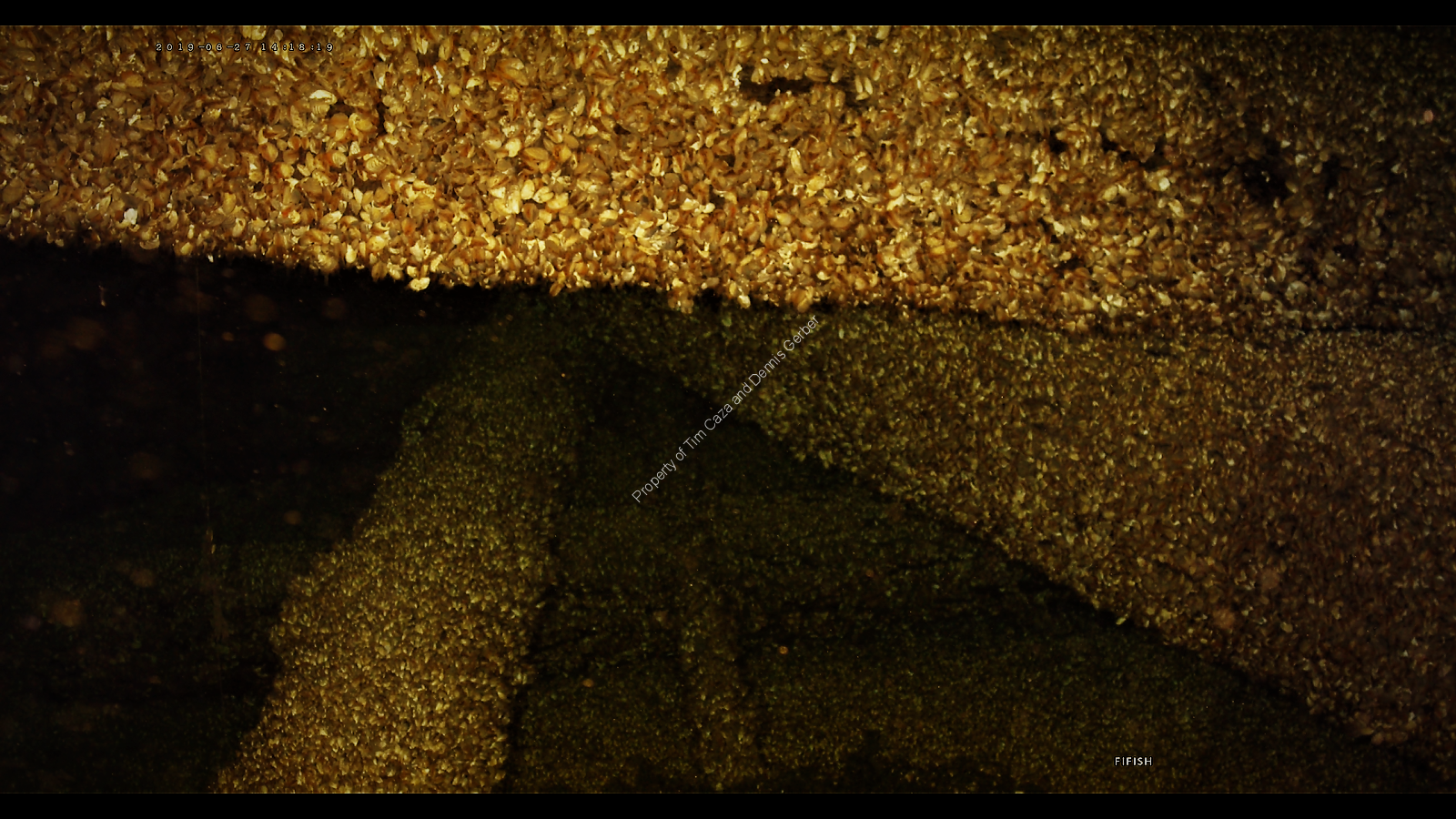 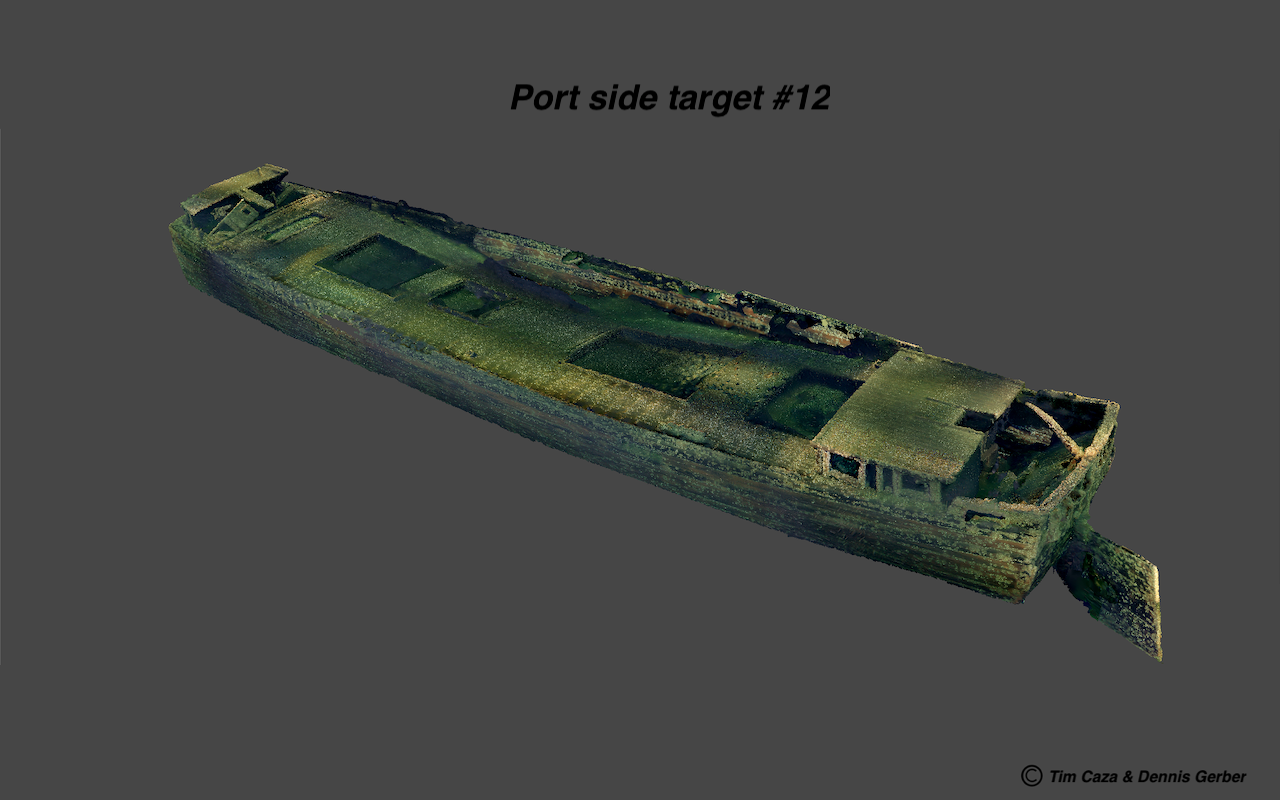 This target is a very large rectangular style canal boat.  It has an intact cabin in the stern and a horse stall on the foredeck.  She is fitted with iron cleats and two large cargo hatches.  The starboard side is split away from the main deck. It is full of coal and sets upright on the bottom of the lake. It is one of the largest canal boats in the lake. 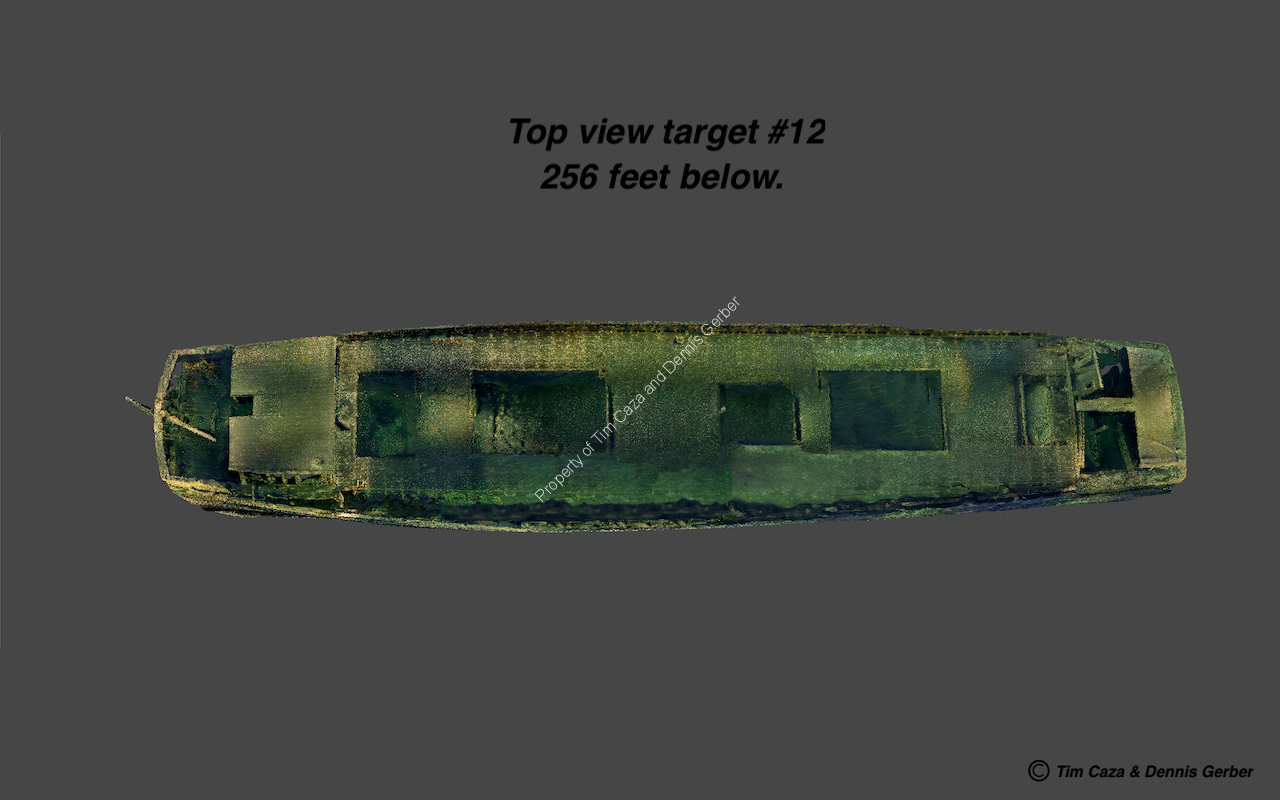 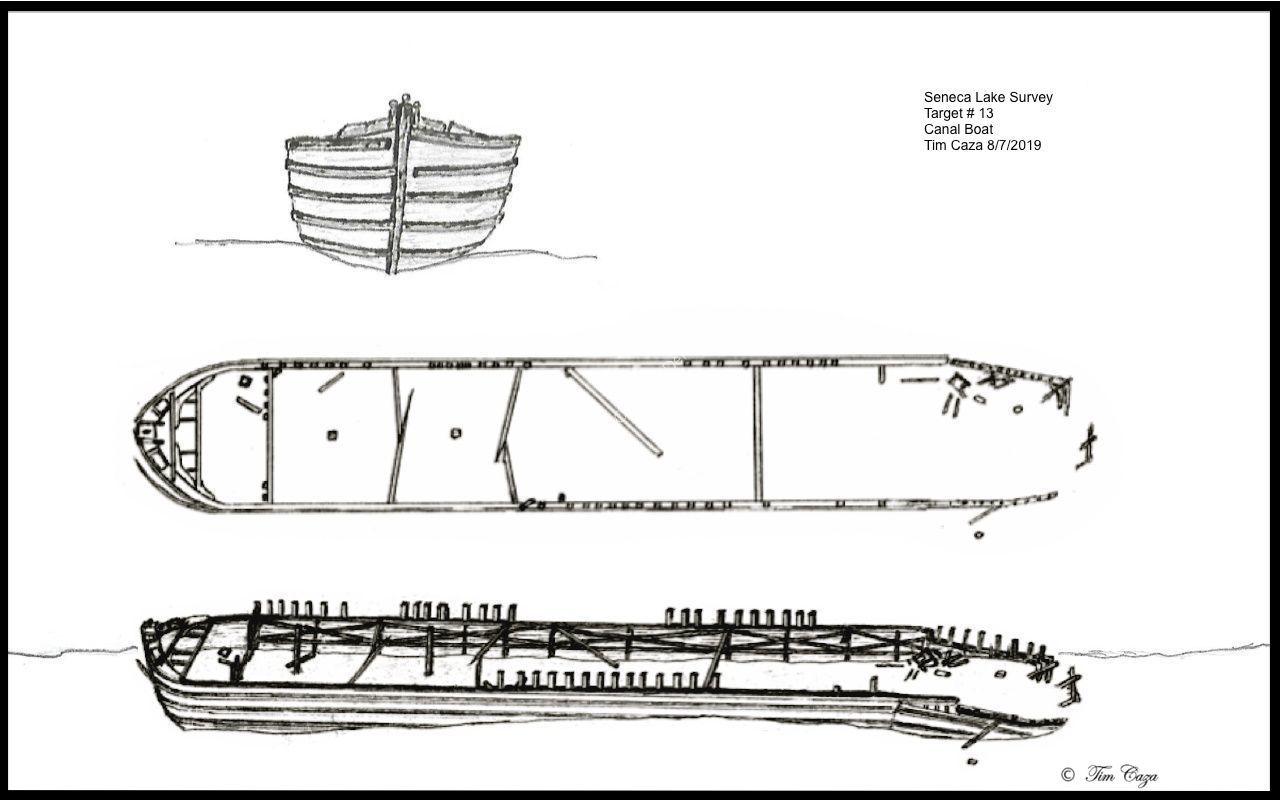 This canal boat appears to have sunk stern first due to the damage in that area.  She has a cook stove where the cabin would have been along with other artifacts around that area.  All of the wood posts along her sides would have supported a roof to cover the entire vessel to protect perishables.  This does account for no cargo being found aboard this wreck. The roof most likely floated away when she went to the bottom of the lake.  The construction of the sides of this canal boat are much different than the other canal boats we have located. The entire vessel is open with no walkways along the sides.

Target # 14 was discovered in July of 2019 in deep waters of Seneca Lake. It went down bow first and now rests upside down in 386 feet of water. The image came from a voyage to the bottom of Seneca Lake with the Fifish Pro V6 Plus underwater drone on May 7, 2021. 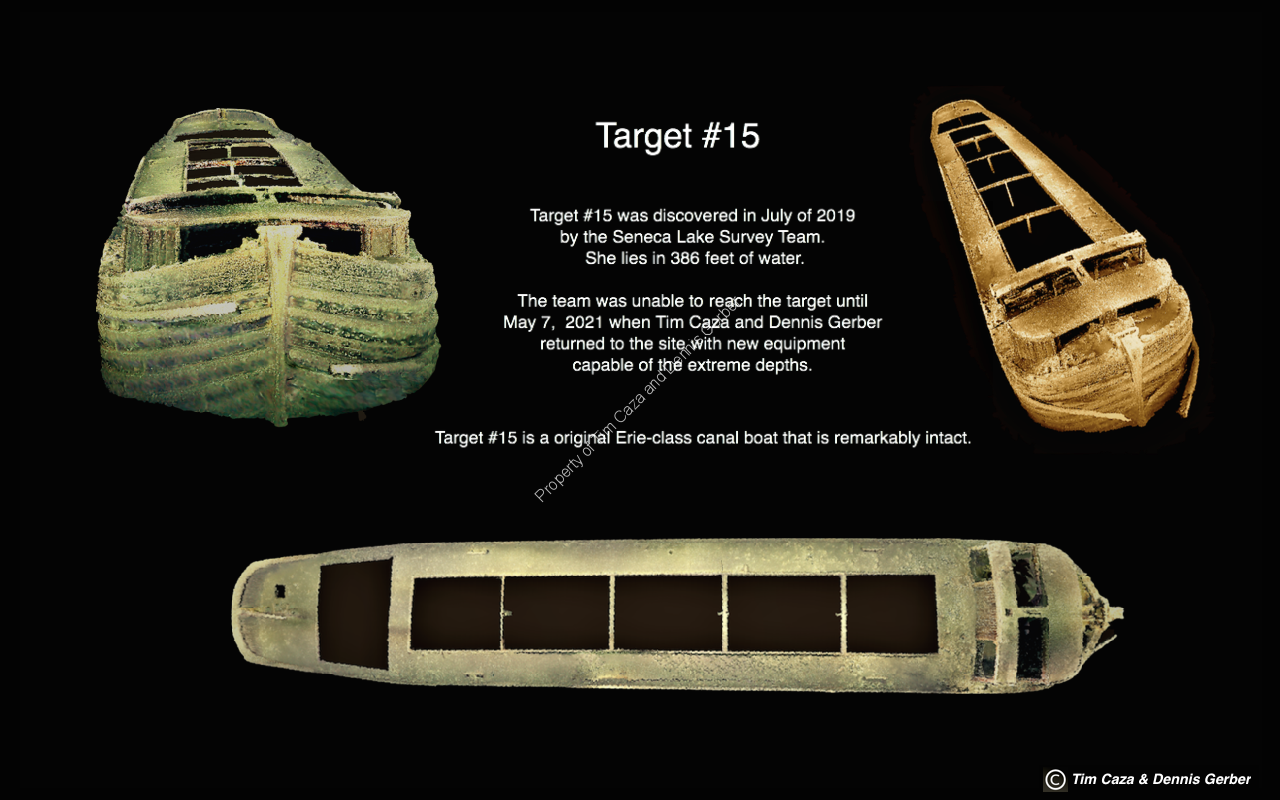 Target # 15 appears to be a totally intact canal boat with cabins in the stern and on the bow. Verified with sonar imaging in deep waters. 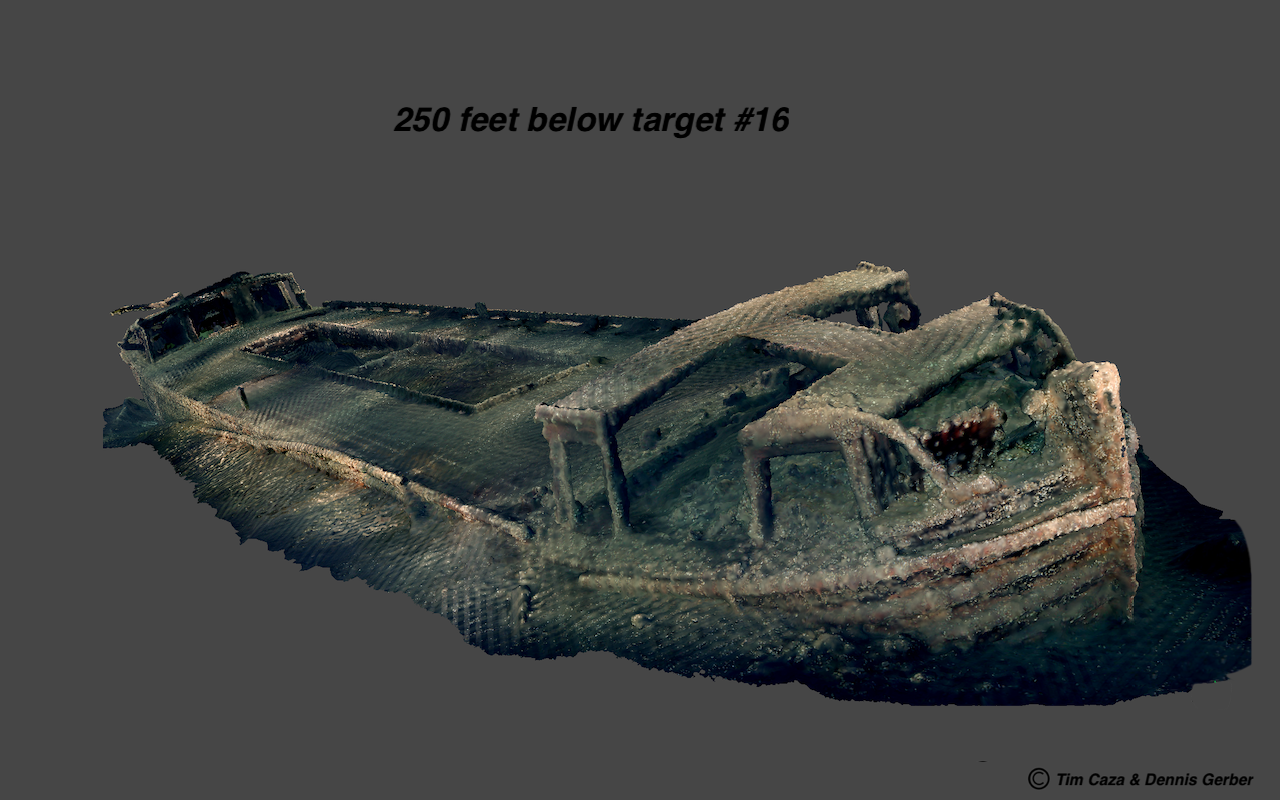 This vessel is totally intact.  It has a cabin in the stern with a cook stove, a set of steps, and the stovepipe still visible inside.  As well as a bilge pump on her deck.  She has a horse stall on the foredeck.  The vessel has one large cargo hatch with bitts along her side.  The only visible damage is that the bulkhead between the horse stall and the cargo hatch blew out when the cargo shifted as she sunk.  This target was discovered in 2019 while returning to another target. 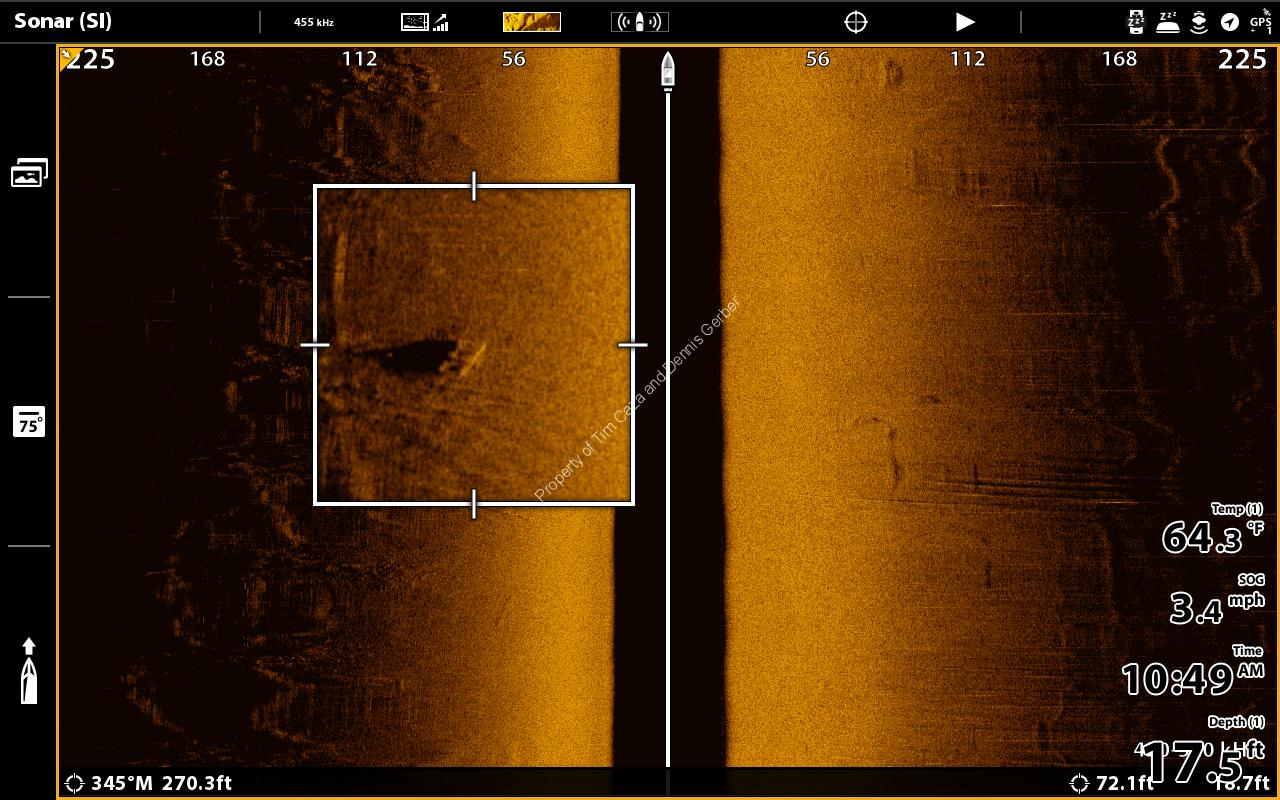 A car found in Seneca Lake during the 2019 Survey.

During the 2021 season in Seneca lake there was an additional 16 target located.  15 of those targets were canal boats one target was a boat hoist.