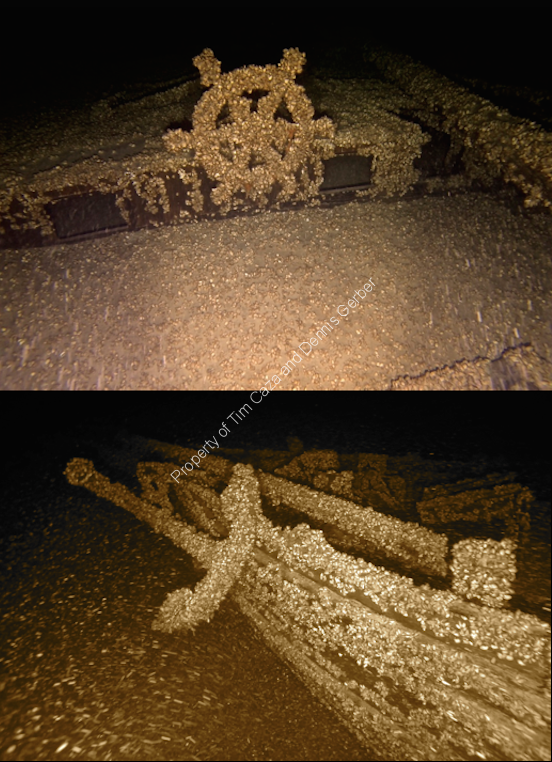 The site of the William Elgin was originally discovered by Tim Shippee and his 13 year old daughter Ariel on September 1, 1997. Tim Shippee and Dennis Gerber later attempted to gather some photographs of the site with a drop camera but were unsuccessful. It wasn’t until nine years later in the summer of 2006 when they were finally able to identify the site, thanks to Dan Scoville and Jim Kennard.

Dan Scoville was eager to test an underwater ROV on a deep site that he and the students from the Rochester Institute of Technology had just developed. This was a perfect opportunity. They were able to gather the first images of the site and with the help from Jim Kennard they were able to identify the site as the wreck of the William Elgin, a two-mast schooner.

Tim Caza and Dennis Gerber returned to the site 14 years later on September 9, 2020, to test their ROV capabilities. The ROV dive was a total success with some great images gathered with more information learned about the wreck site. The wreck is in remarkably great shape as if it was placed on the bottom upright. The only damage is that the mast has fallen over to the port side of the schooner. There were more quagga muscles noted on the wreck from the previous ROV dives. 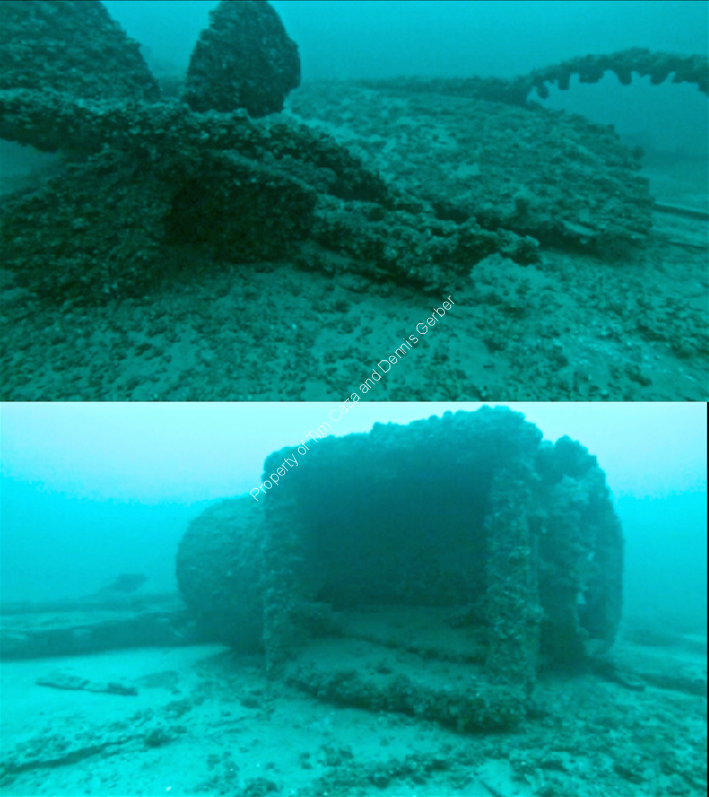 The steamer went missing in heavy weather on Sept. 22, 1919, while bound from Fairhaven, NY to Kingston, Ontario. Some wreckage came ashore at Burt Point, near Oswego. Much of it was so thoroughly splintered that speculation was that she had exploded her boiler. The steamer Woton reported seeing a mess of wreckage off the Main Duck Island area. Winds were strong from the northeast that blew the wreckage south to Oswego. The cabin top was found on the beach near Oswego along with pillows and lifejackets with the steamer’s name on them.

101 years later on August 22, 2020, Tim Caza and Dennis Gerber found what they believe to be the T.J. Waffle over  twenty miles off Oswego. Whether she exploded her boiler or it was tossed around like a rag doll in such a violent storm it’s hard to say. It does appear to have had a violent end by the looks of the wreck site. One woman and five men lost their lives that night. Captain Charles Beaupre, William Switzer, engineer Russel David, mate William Sweet and cook Mrs. William Sweet, wife of mate. Other crew members names not known.   More 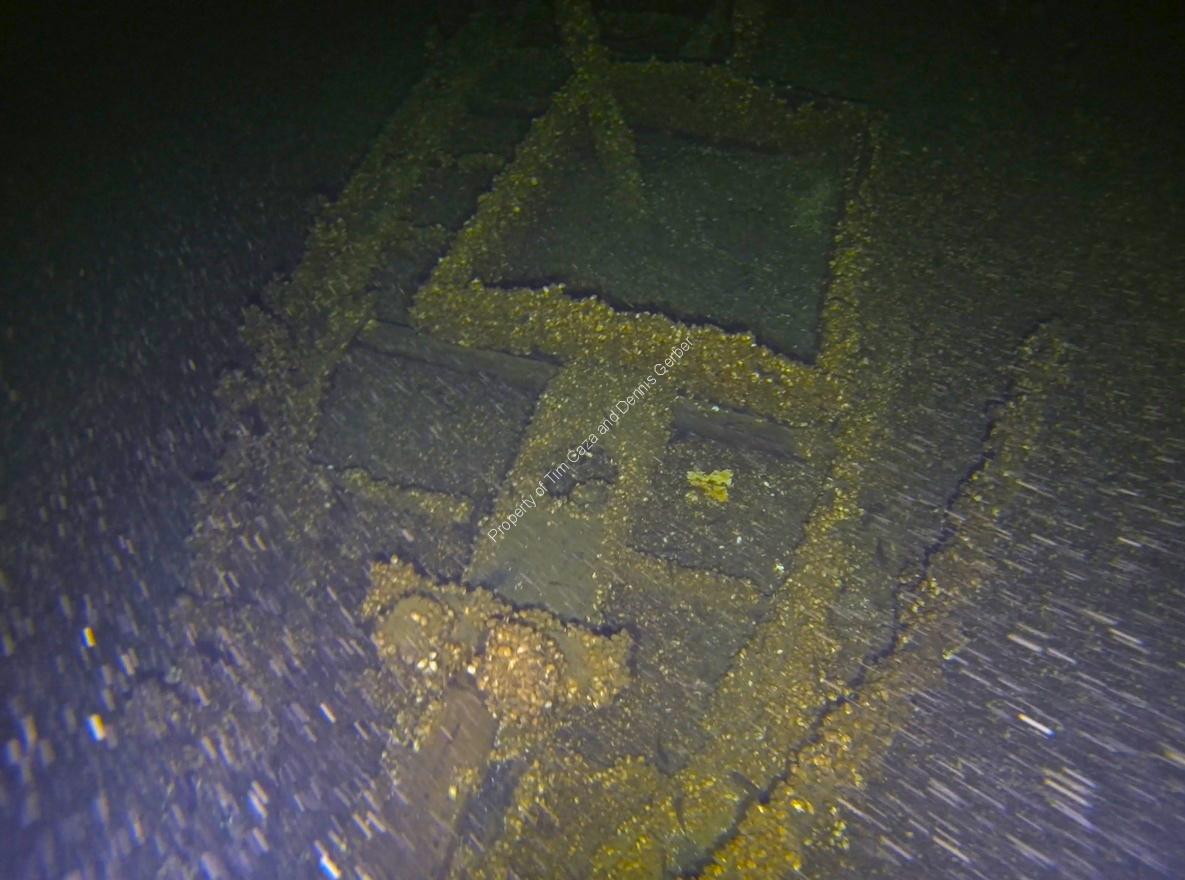 It was on May 18, 2019 when Dennis and I picked up a target in deep waters of Lake Ontario but unfortunately we did not check it out that season.   We returned to the site on August 15, 2020 to investigate the target with our ROV. Well we were not disappointed it turned out to be a rare dagger-board schooner.

Whitford Gill and his family built on Galloo Island the schooners: Three Brothers (1827), Old Taylor, and Galloo. It is estimated that these schooners were built in the 1820’s – 1830’s. Jim Kennard, Roger Pawlowski, and Roland Stevens found the Three Brothers dagger-board schooner in July of 2014.   We believe this dagger-board schooner we found is one of the other long lost schooners. We just don’t know which one it is at this point in time.  More 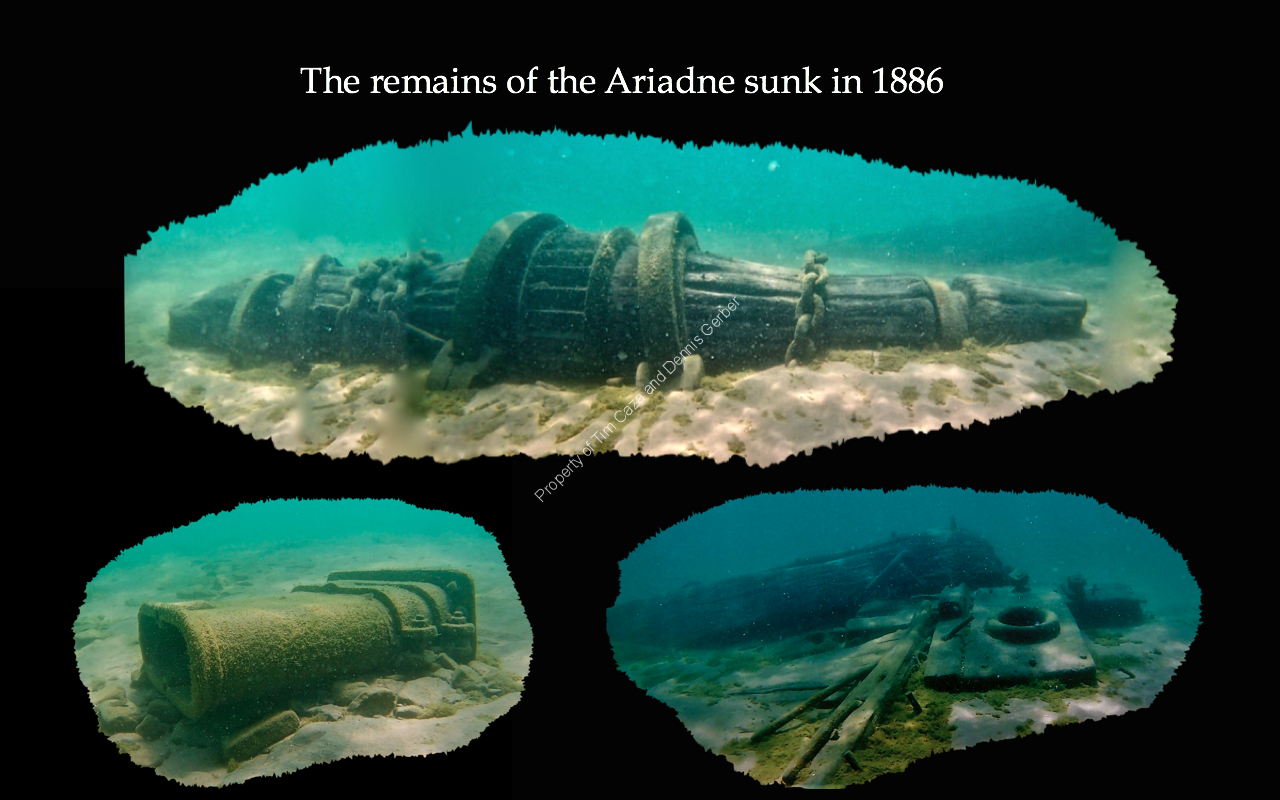 The remains of the Ariadne sunk in 1886.

It was July of 2020 when a number of timbers were discovered washed ashore north of Southwick Beach. With that discovery the locals said they have seen what they believe to be machinery in shallow waters in that area. Mark Barber went up to investigate and did some dives on the site. He found that it was the winless belonging to the lost schooner Ariadne. Tim and Dennis joined Mark on August 15, 2020 to Map the area with sonar and take some underwater video of the discovery.

After mapping the area we found that the only visible remains of the Ariadne was the winless, the bilge pump, a few timbers, and ballast stones. Even though the remains are only in 4 to 5 feet of water the winless was in remarkably good shape do to the sand wash and wave action.More

During a routine sonar explanation we picked up a small target in deep waters of Lake Ontario. It was on July 7, 2020 when we return with our ROV to investigate the discovery. It turned out to be a smokestack to a steamer. Unfortunately we have yet to find the steamer that belongs to this smokestack. 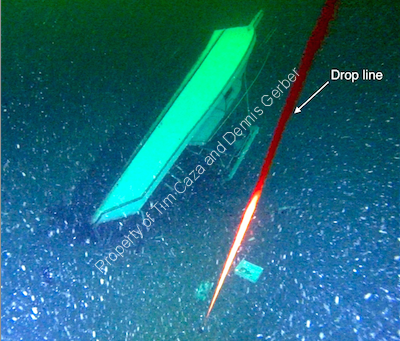 The recovery of a 26 foot fishing boat that sank in Lake Ontario in 147 feet of water.

Chris Martin was hired to retrieve this boat that sank in Lake Ontario in the season of 2019.  Tim and Dennis assisted Chris in locating the boat and doing an underwater ROV survey of the site.  After this survey was completed Chris was able to put a plan together to safely retrieve the vessel.  There were a few weather delays but other than that the operation was a total success. 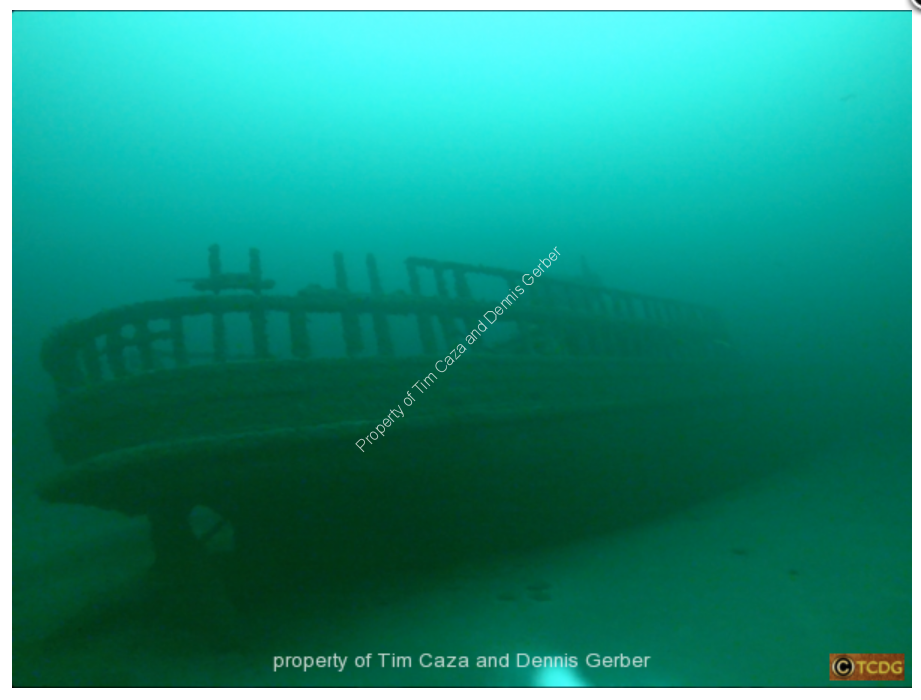 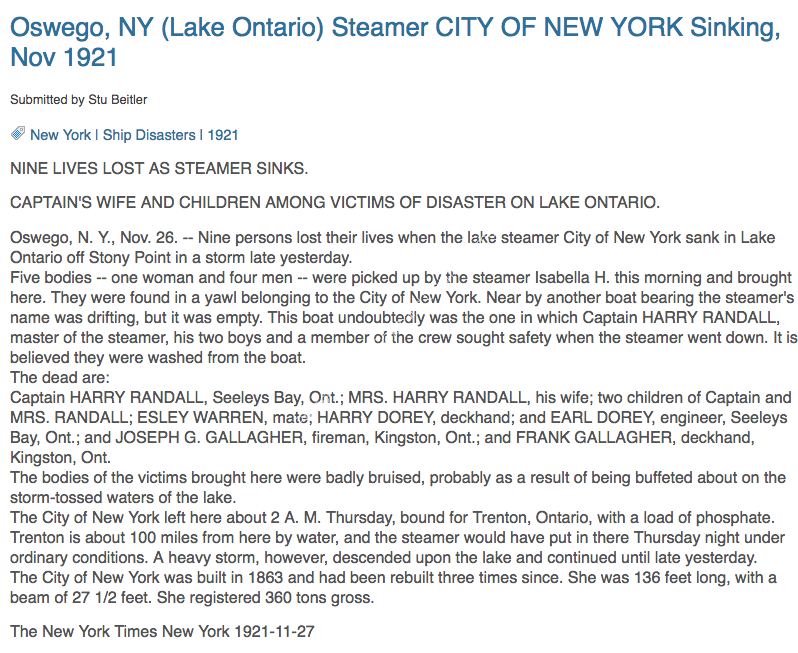 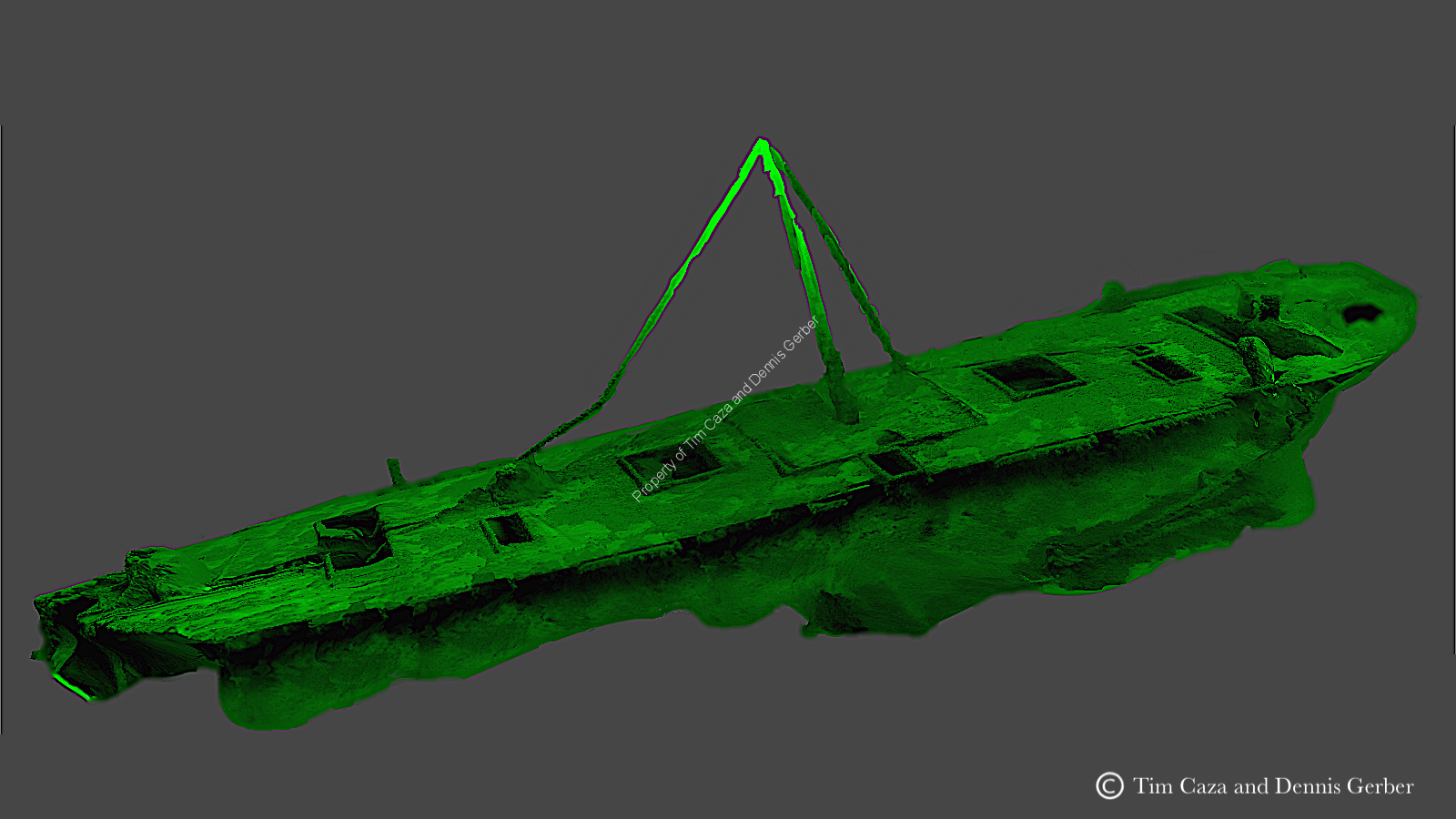 Our first discovery of the 2019 season.

The wreck of the Onondaga found off Stony Point on May 4, 2019 by Tim Caza and Dennis Gerber. The Onondaga was a 3-mast wood schooner 137 feet in length built in 1870 then converted to a schooner barge in 1883. She left Oswego on November 5, 1907 in heavy seas on route to Montreal. The Onondaga ran into seas that was one of the heaviest of the year and sprung a leak. All efforts were made to reach Sackets Harbor, but the barge sank off Stony Point with 632 tons of coal in her bulk.

She now lies upright on the bottom with her port side blown out.   Other than that she is remarkably intact with an anchor hanging from her bow and a boom still standing for offloading cargo. 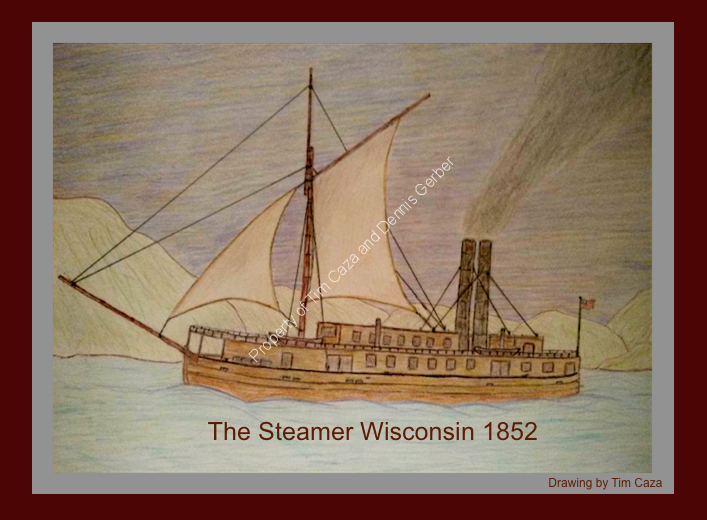 Two Smokestacks to the Steamer Wisconsin discovered in Lake Ontario.

On the 19th day of May 1867 the steamer Wisconsin left Cape Vincent on route to Chicago with passengers and freight. About a mile or so off Tibbetts Point Lighthouse fire was discovered in the boiler room.  All efforts of the crew to gain control of the fire were unsuccessful.  The captain decided to beach the steamer on Grenadier Island but before reaching the island the steamer had become almost fully involved in flames.  The steamer Wisconsin was a total loss. 22 bodies were recovered the following day and brought to Cape Vincent on the steamer Pierrepont.

One hundred fifty years later, Tim Caza and Dennis Gerber found the two smokestacks of the Wisconsin two and a half miles off Tibbetts Point Lighthouse in 85 feet of water.  The smokestacks had fallen overboard as the fire burned around the support cables. 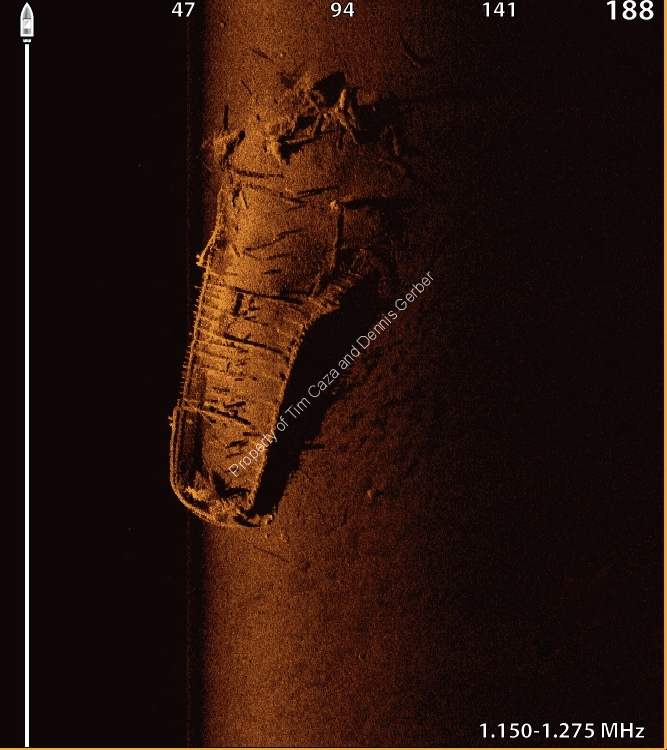 It was 4 AM Saturday morning when an image appears on the screen during a routine sonar expedition in Lake Ontario by Tim Caza and Dennis Gerber.   There was a dive done two weeks after the discovery by Tim Caza and John Shaheen. The wreck is 70% intact and her Specs were      176.5 x 30 x11  with a cargo of hard coal aboard. 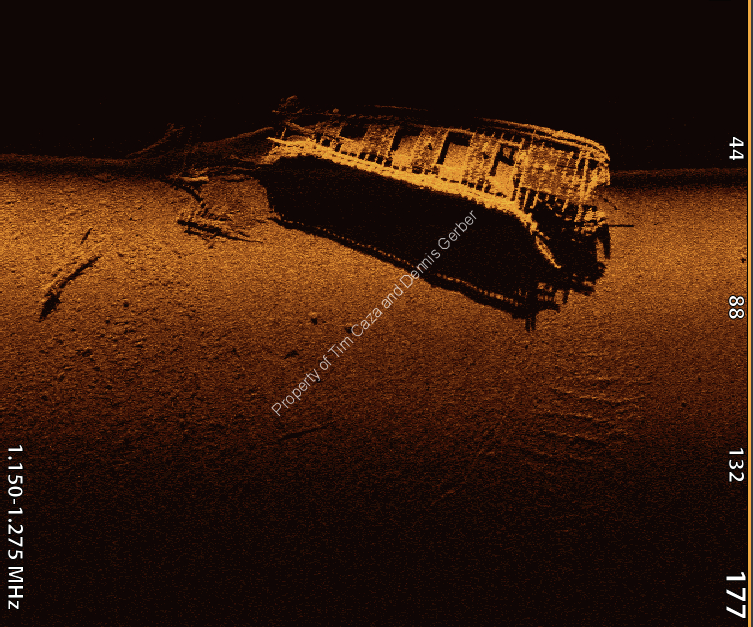 About twenty miles out in Lake Ontario Tim Caza and Dennis Gerber found the H.B. on July 8, 2016.   Four persons lost their lives, J.D. Schamp, Steven Lebux, Fred Lahance, all Canadians, and Alice Derusha, the 16 year old daughter of the captain, John Derusha, of the H.B. The ill-fated schooner barge, with two others, was being towed from Oswego to Ogdensburg loaded with coal. The towline broke during a heavy windstorm and the  H.B. went adrift. In a short time the H.B. went down. Her Specs were 176x34x13. 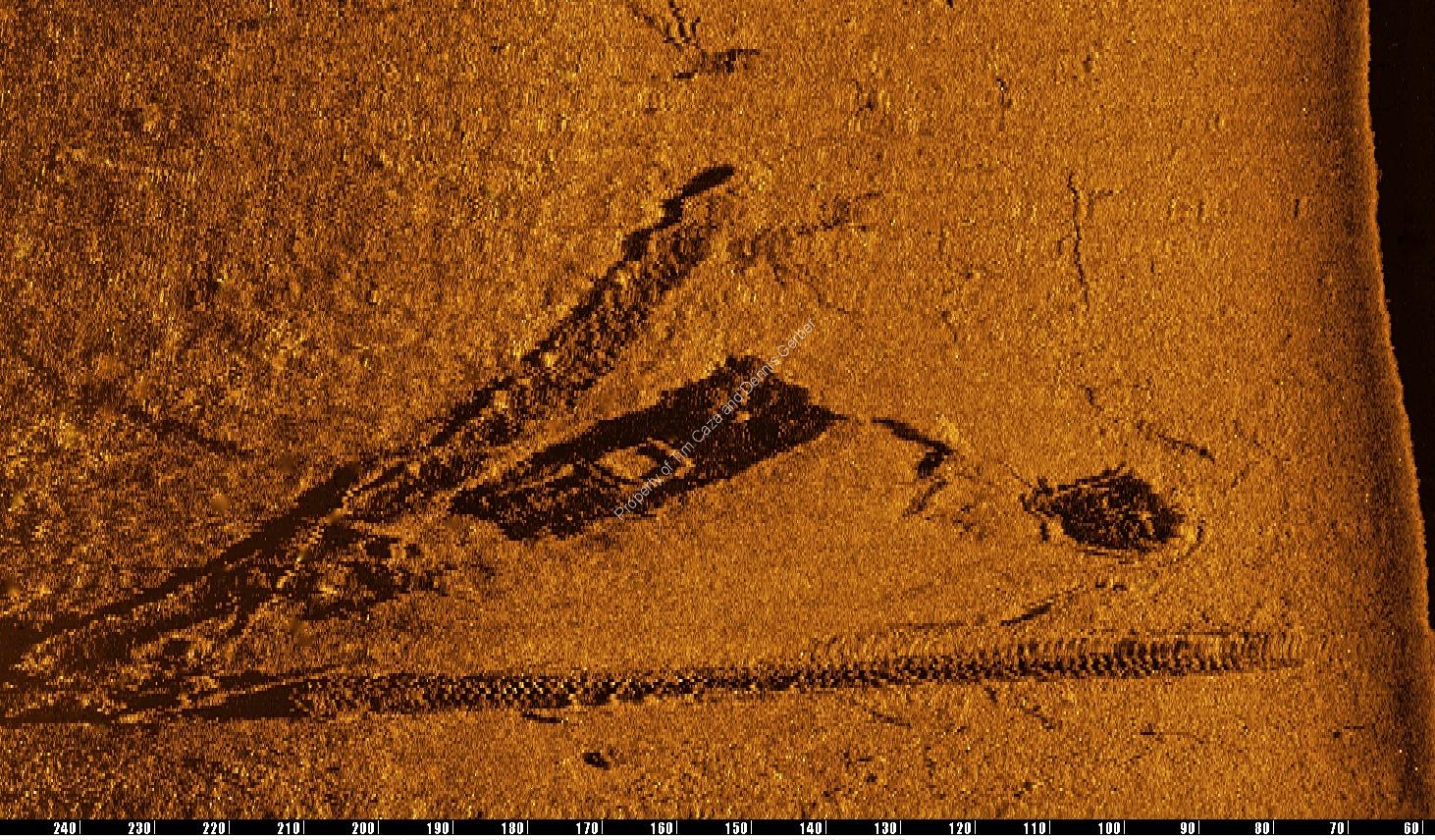 The wreck of the Menominee, or the wreck of the Buckley sunk on October 17,1912.           There are different newspaper accounts on which vessels actually sunk in October of 1912. This is believed to be the Menominee based on this article below.  We won't know for sure until we revisit the site in the future to gather more information.

Syracuse Herald New York 1912-10-17, Submitted by Stu Beitler.  This morning the steamer Nicaragua sighted the Menominee and the tug Proctor with the barge Buckley and towed the tug and Buckley to Cape Vincent. Then she returned to get the Menominee, but before reaching her picked up Captain DERUSHA and his son ELMER, who had been floating on a hatchway since the line parted.  As they started for the Menominee that boat went down, but her crew was saved.

The vessel is split wide open on the bottom, dumping all her cargo of coal.

Steamer believed to be the Tug William Gardner that burned on Lake Ontario in May of 1883.

Steamer found  by Tim Caza and Dennis Gerber off Galloo Island.  The steamer is in 90 feet of water and it appears to have burned to the water line. Found on Sept. 23, 2015. 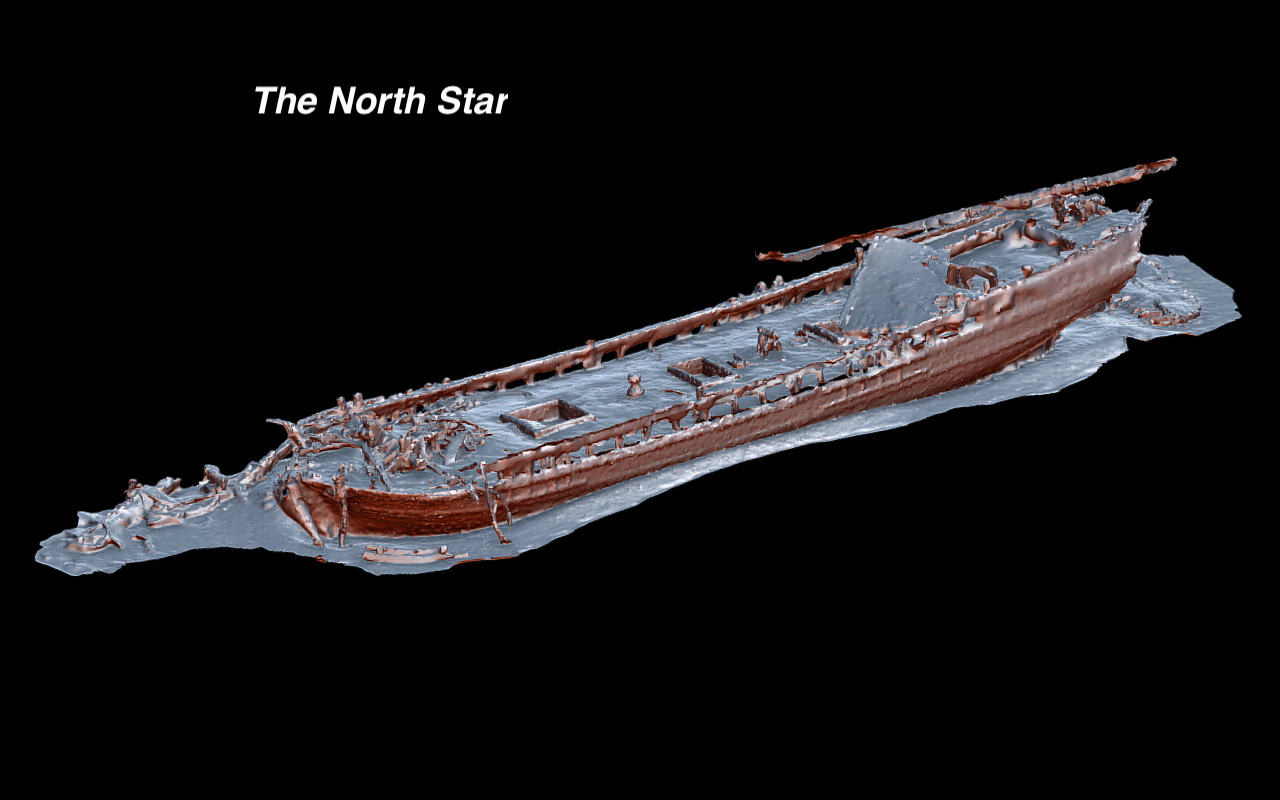 She was a wood schooner built in 1854 in Waterbury, Port Dover, Ontario.  Her specs were 98x28x8, 149gc.  She sank in Lake Ontario with a cargo of coal and was a total loss.  Tim Caza found the North Star on September 4, 2014.  The vessel is intact with the bowsprit broken off and lying on the bottom of the lake.  The main boom is       lying across the starboard backside of the vessel. 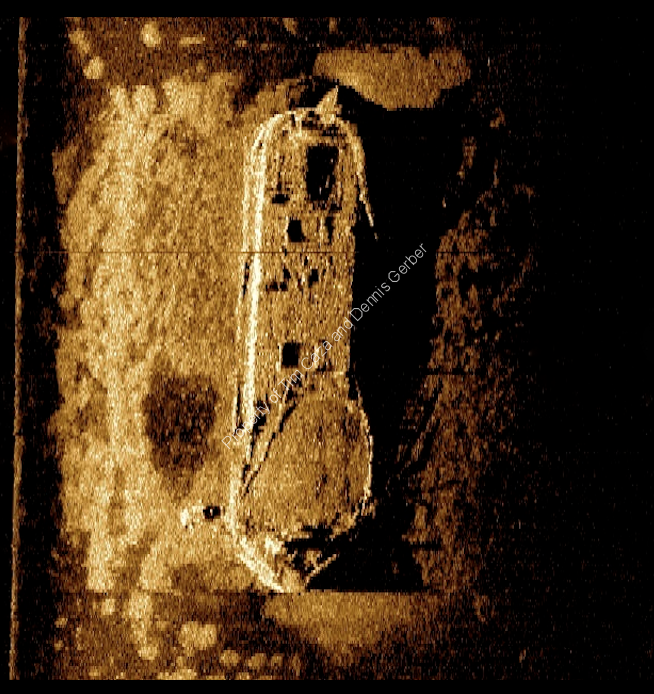 The American was a wood schooner built in 1870, Asa Wilcox, Three Mile Bay, NY.  The specs were 137x26x10, 269n.  She was bound for Prescott, Ontario, in tow by the Tug Proctor.  She sank for unreported reasons off Stony Point with a cargo of coal aboard.  The wreck is mostly intact. Originally pinged with sonar by Tim Shippee and Dennis Gerber in August of 2008.  New sonar images and photographs were taken on September 4, 2014. 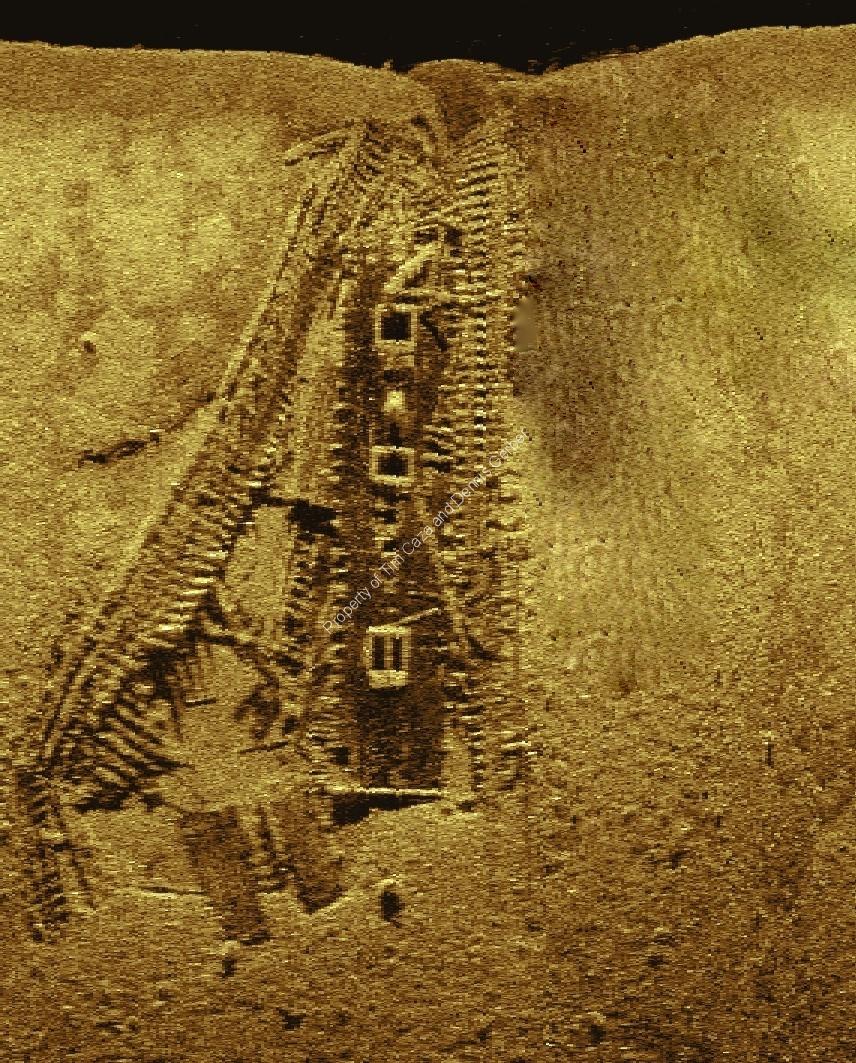 The J.W. Langmuir was a wood, two-masted schooner built in 1865 as a brig in Picton,Ontario.   Her specs were 88x21x9, 116t.  Major repairs were done in 1868.  It is possible it was converted from a brig to a schooner at that time.   Bound for Oswego from Picton, she was 8 miles off the Port of Oswego when she became unmanageable due to taking on water.   She was driven back to the shoal at the head of Gallo Island and grounded, then broke up.  Her crew made it to shore in her yawl.  Later she was stripped and relieved of her cargo by the schooner Sassacus and Tug Wheeler.  Tim Caza and Dennis Gerber picked up the wreck on sonar on September 19, 2014. 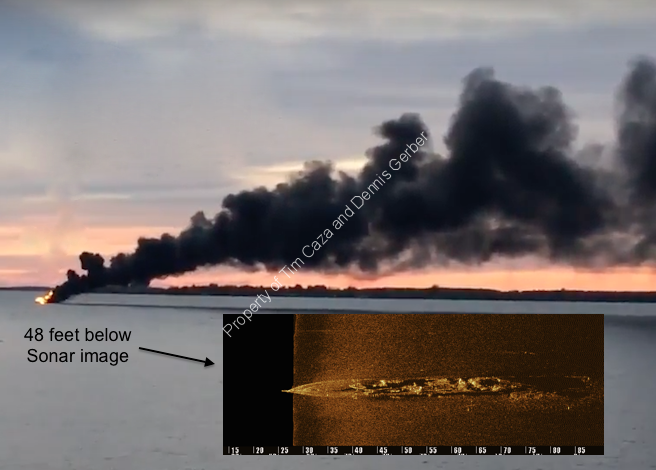 Fire burned through the hull on a Sea Ray the vessel sank in 48 feet of water in Sackets Harbor. 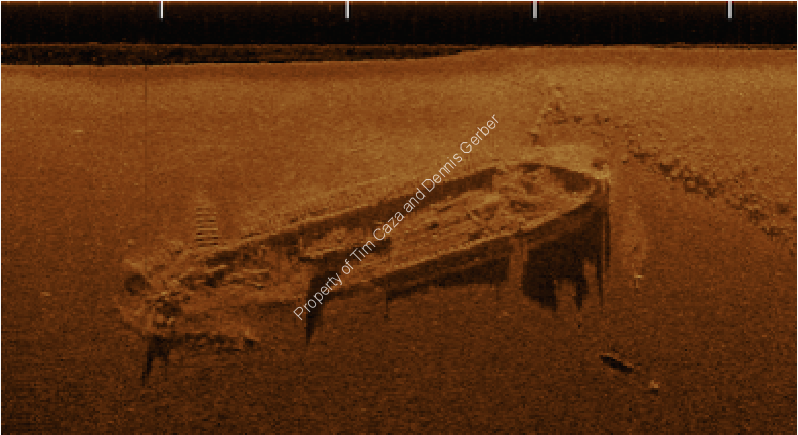 The Ellsworth was built in 1869 on Seneca Lake as a sailing vessel.  In 1870 she was fitted up as a steam vessel.  She was on a ten day cruise among the islands at the head of the St. Lawrence and vicinity.  The Ellsworth was at anchor off Stony Island in about 21 feet of water.   A fire broke out in the kitchen causing the vessel to burn to the water line.  She now lies in 21 feet of water off Stony Island. 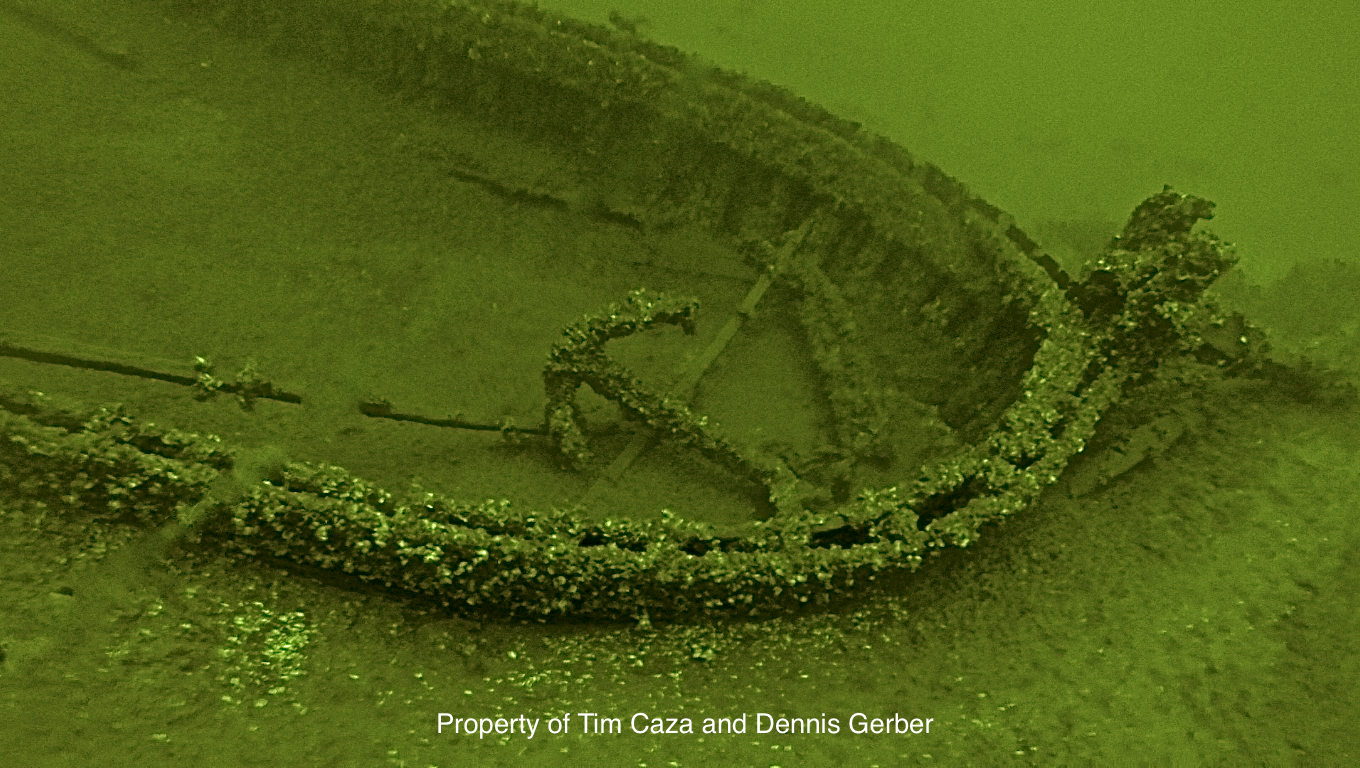 Small Schooner in 115 feet of water. 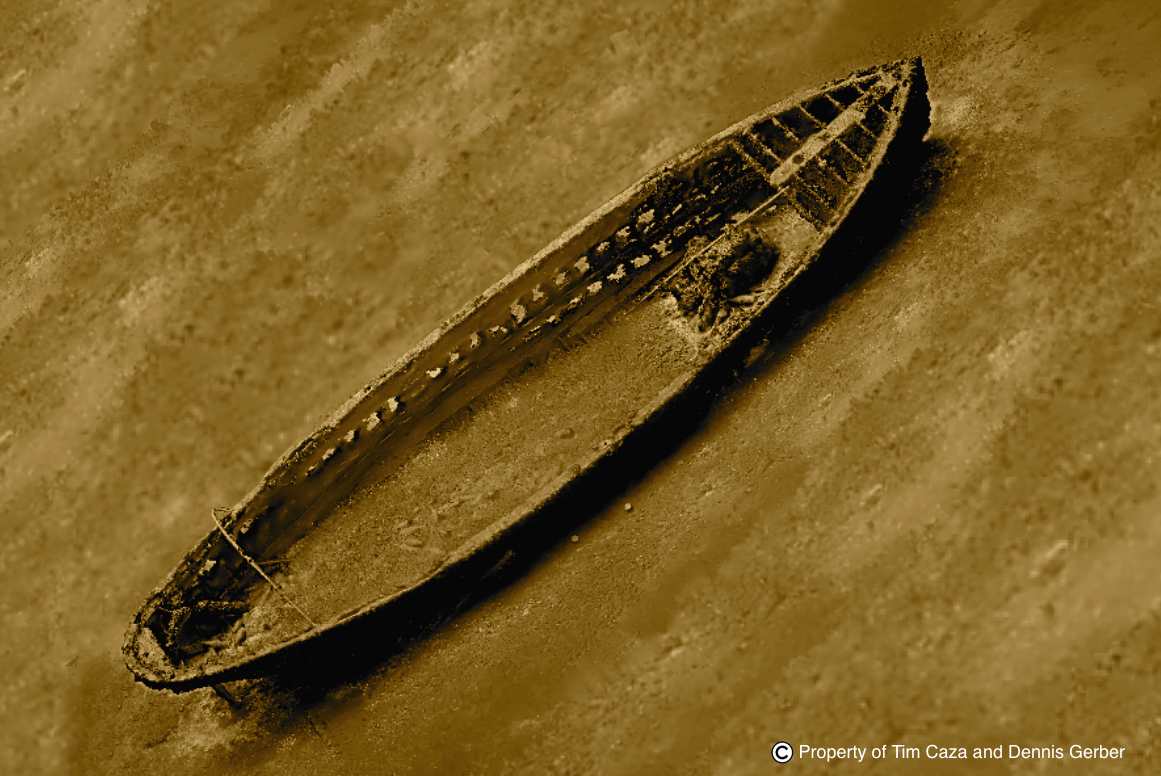 This wreck was discovered in 2016 by Tim Downing with side scan sonar.  It is a fantail launch that for some reason was hauling a load of bottles that date back to the prohibition days.  So we call this wreck the Rum Runner. 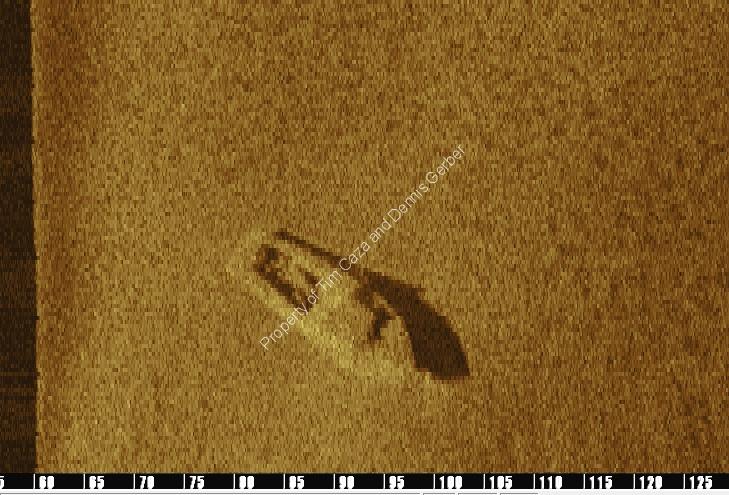 Found December 8, 2015 in Lake Ontario by Tim Caza and Dennis Gerber in 68 feet of water.

Cargo barge found on June 16, 2016 by Tim Caza and Dennis Gerber on a routine scanning expedition. The vessel is 100 feet x 40 feet.  It is totally intact, and lies in 80 feet of water. 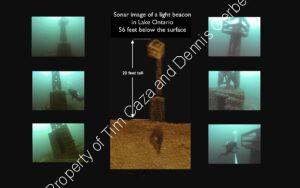 Light beacon found in Lake Ontario 56 feet below by Tim Caza and Dennis Gerber on July 8, 2016. The light stands upright on the bottom 20 feet tall and 36 feet from the top of the light to the surface of the water. This was a very interesting discovery. 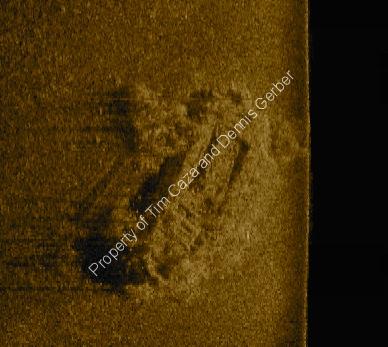 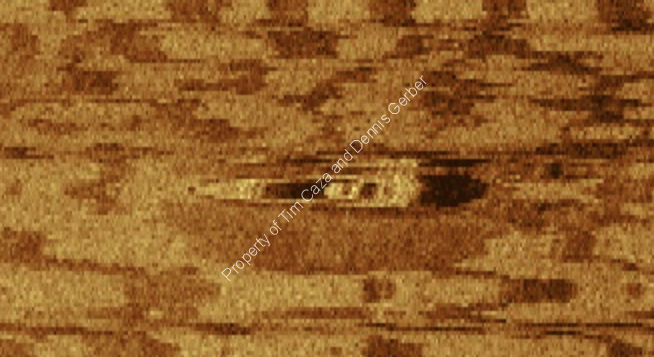 Found on September 21, 2016 by Tim Caza and Dennis Gerber in 65 feet of water.  The boat is an inboard and has two fishing poles stil in the craft.  A tackle box lies about 70 feet behind the vessel.