It was the night of June 12, 2011, when I was on a routine sonar expedition on Oneida Lake.   Around 1:30 a.m. an image appeared on the sonar screen that looked like it was man made.  Some time was spent retrieving sonar images at different directions of that target.  The next day I dove the site and       verified that it was a shipwreck of unknown origin. 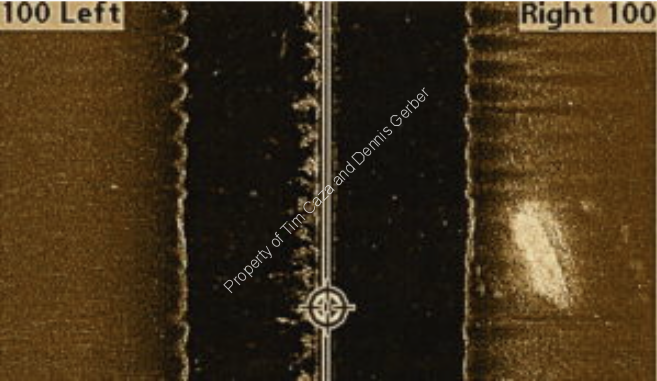 Original sonar scan, most of this vessel was buried in the bottom of the lake. 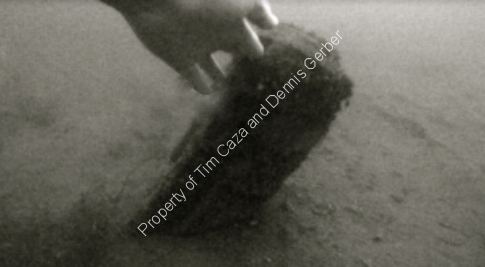 I was able to note a bow sprint protruding from the mud line about 1½ foot high.

I also noted a number of ribs approximately 18 inches apart. 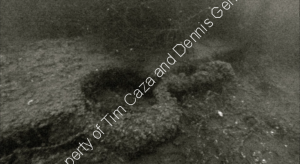 There also appears to be  a possible mass support system about 15 feet back from the bow.

The vessel appeared to be 10 feet wide and approximately 50 feet in length.  With the rest of it being totally buried, it was impossible to know its true length.  All of the structure that was visible was made of wood and encrusted in zebra mussels.

After I found this wreck I knew it had the potential to be a great historical discovery.  I notified my diving partners, Chris Martin and Tim Downing, of the new find.  We all went out to the site to do a noncontact survey to get a better idea of what type of vessel I had found.  I did some video work along with some preliminary drawings of the site.  After viewing the video and drawings my thoughts were that it could be a possible Durham boat.

At this point I know that more investigation would need to be done to verify if this site was a Durham boat.

Because of the possible historical nature of the site, I felt that it was wise not to go back to the site.

It was August of 2011 when I first contacted the New York State Museum in Albany.  I spoke to Christina B. Reith, Ph.D. State Archaeologists and Director, New York State Museum Division of Research and Collections.  In order to go forward with the investigation of the site we would have to go through the permit process and have an archaeologist onboard.

On March 31, 2012 there was an Oswego County War of 1812 Symposium, which my diving partners and I attended.  We knew that there was going to be archaeologists speaking at the seminar.   After the seminar we sat down and spoke to Ben Ford.   Ben works at the anthropology department at Indiana University of Pennsylvania.   We talked to Ben about our discovery of a possibility Durham boat in Oneida Lake.  We also asked him if he would be willing to come up and dive the site, so we could get his opinion on what type of vessel it may be, and if he would be willing to work with us on further investigation.  Ben joined us in our efforts and after my first dive with Ben he felt that it might very well be a Durham boat.

It was now time to start the permit process with the state.

Ben Ford helped us through this lengthy process and the permit was approved on October 12, 2012 for phase 1 of the project, which was a noncontact survey.  A full report summarizing the work was completed by Ben on January 20, 2014 and sent to the New York State Museum.

After the state reviewed the phase 1 full report and our plan for phase 2, they issued the Section 233 Permit on March 15, 2015  permit number 3118 for phase 2 of the project.  This would require much more work and equipment.  We spent many hours preparing for the excavation, casting the mooring block, building the dive platform and dredge system, and completing other logistics.

In order to document the site we had to unearth three key areas of the vessel: the bow section, the center section and the stern. 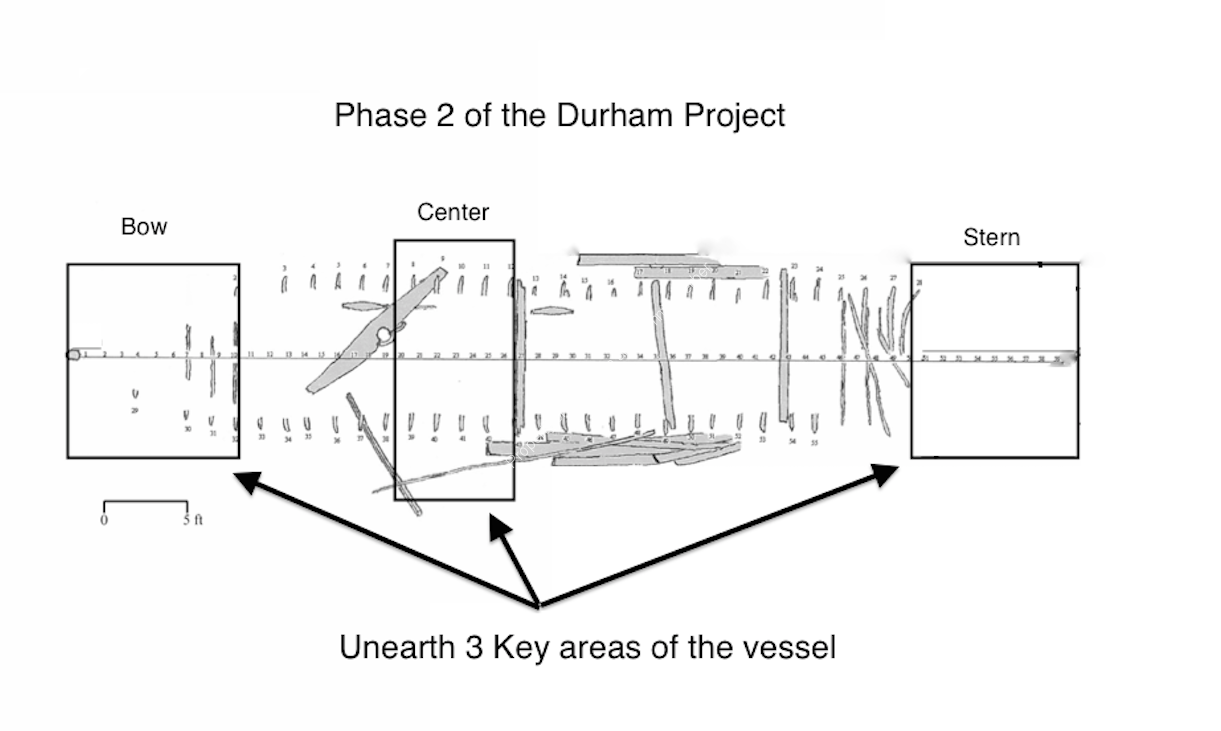 To do this I had to build a suction dredge to remove the sediment.

This is the raft that Tim Downing built for our service platform.

Tim also casted the mooring block for the site.

Every day Chris Martin would tow the raft to the wreck site and tow it back in at the end of the day.

Above the wreck site, the yellow air hole’s supplies air to the small suction dredge below. 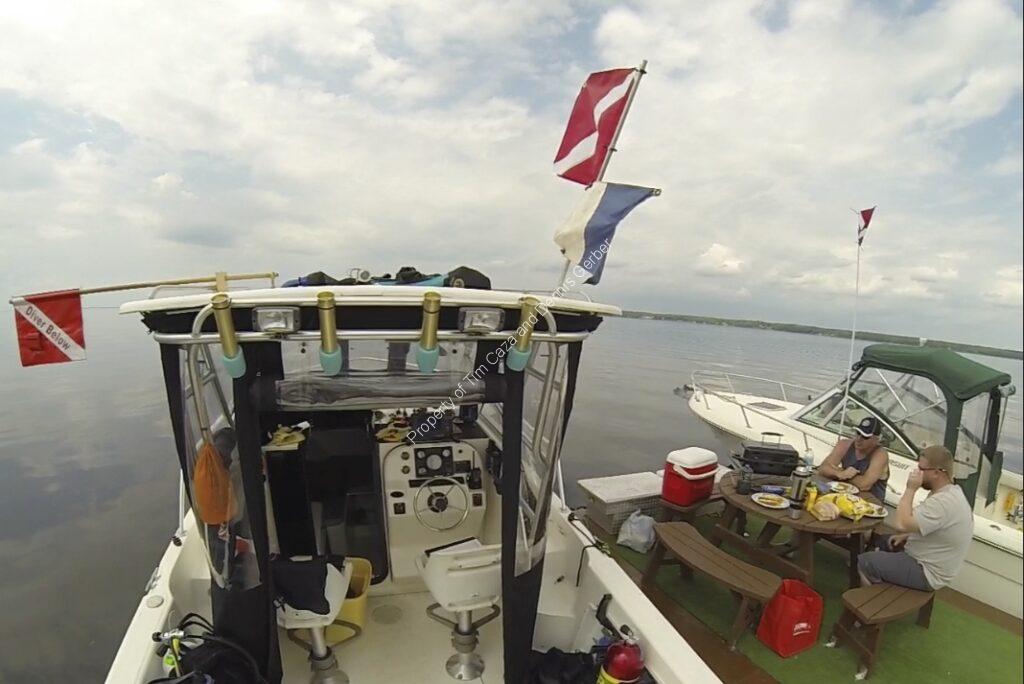 After unearthing the three key areas, we were able to document and photograph the vessel. 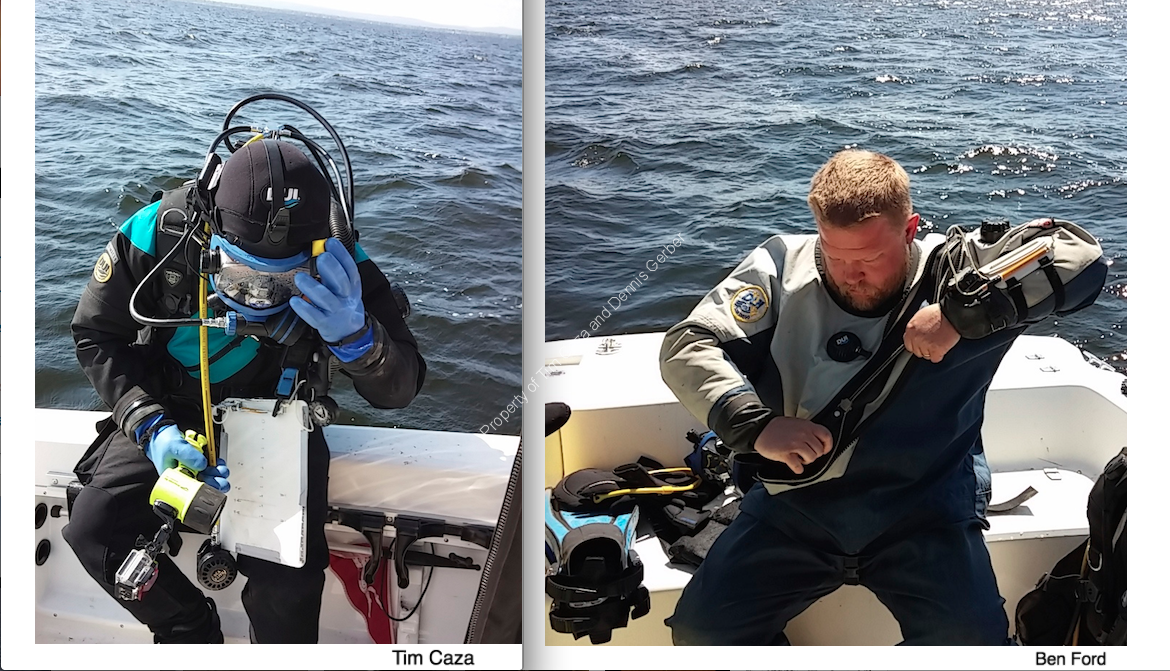 Time to go to work, Tim Caza and Ben Ford. 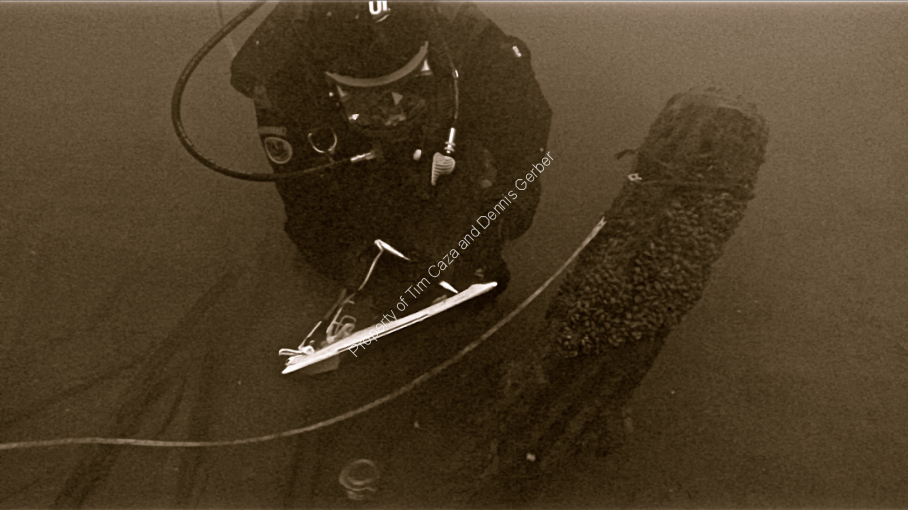 Tim Caza - recording the stem of the vessel. 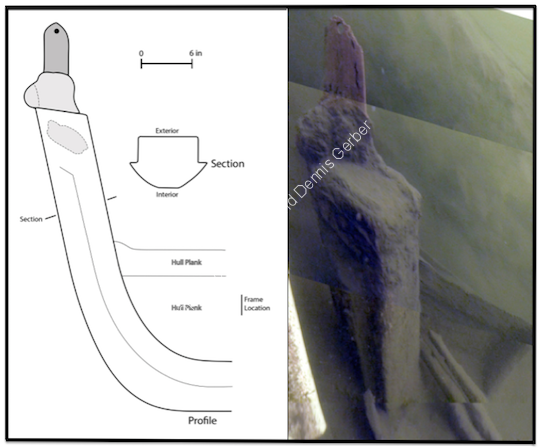 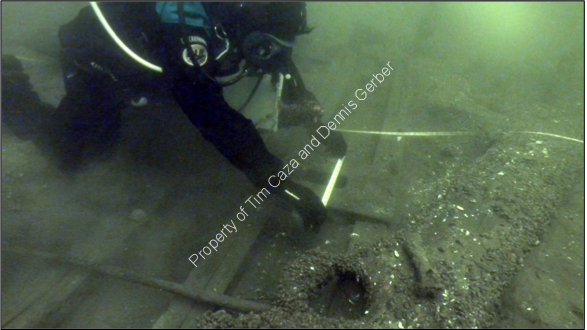 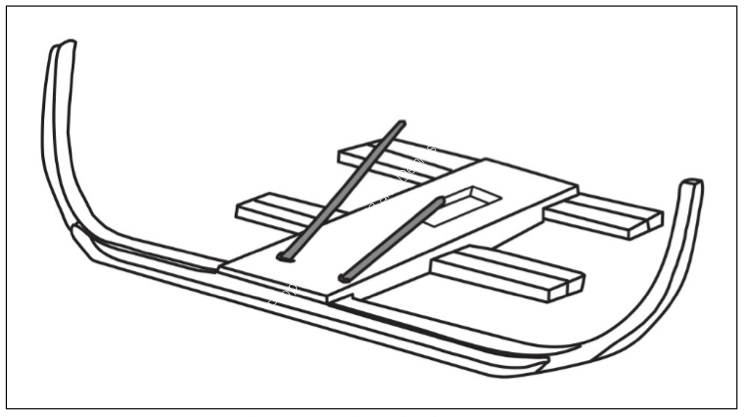 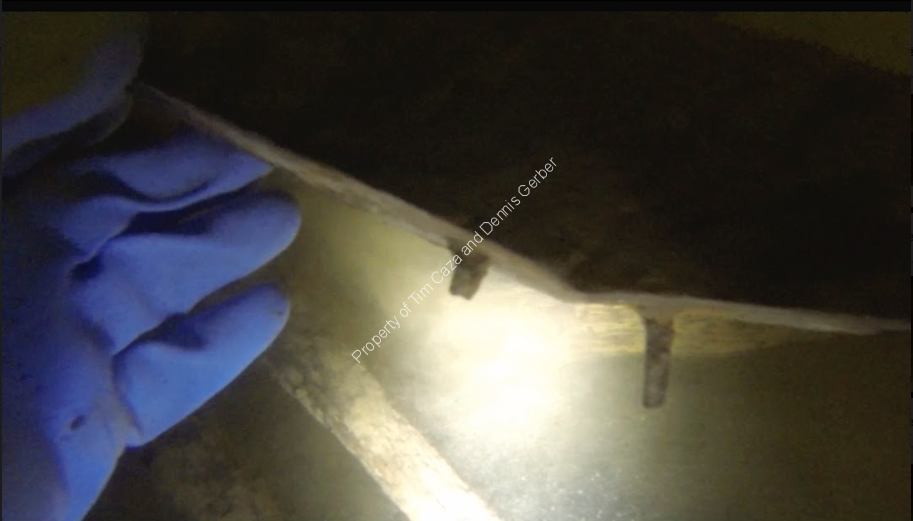 Square shank nails used in construction of the vessel. 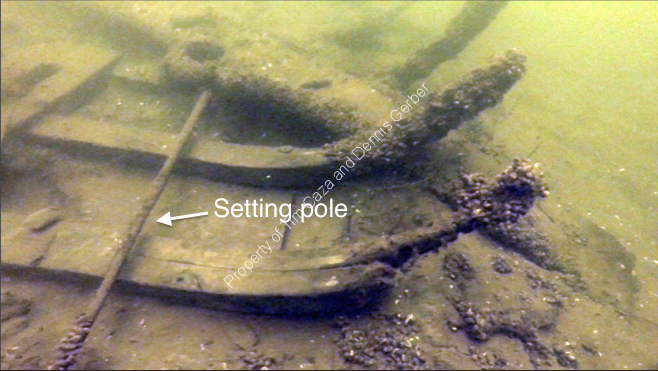 Setting pole in the midsection of the vessel. 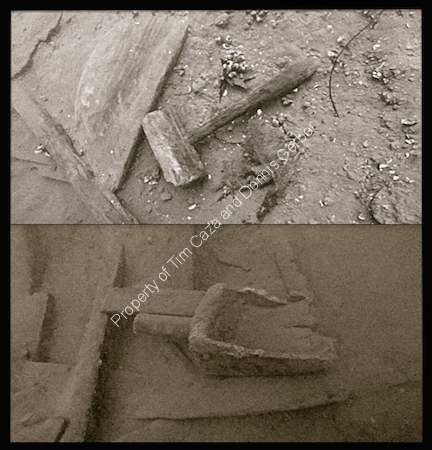 Some artifacts discovered on the site.

All artifacts that were recovered were transferred to the Lake Champlain Maritime Museum for restoration.

From there they will be transferred to the New York State Museum in Albany. 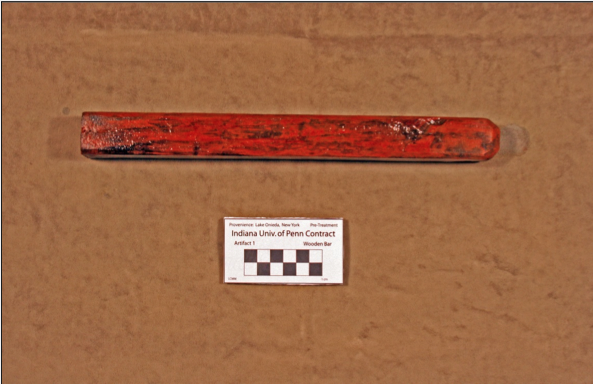 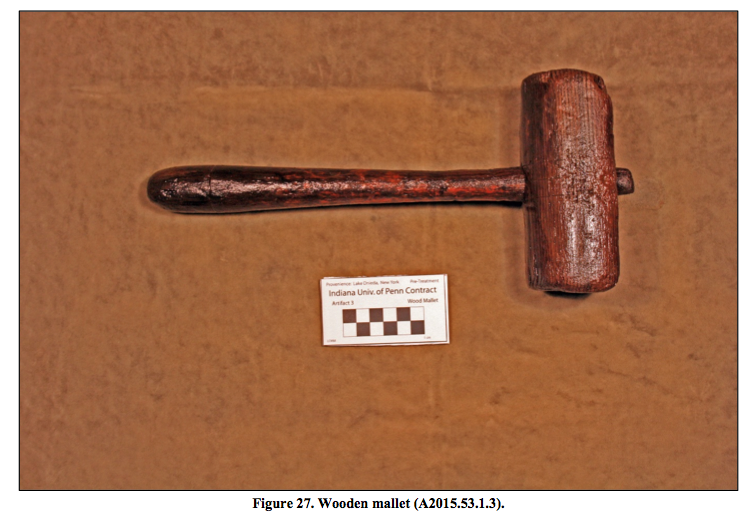 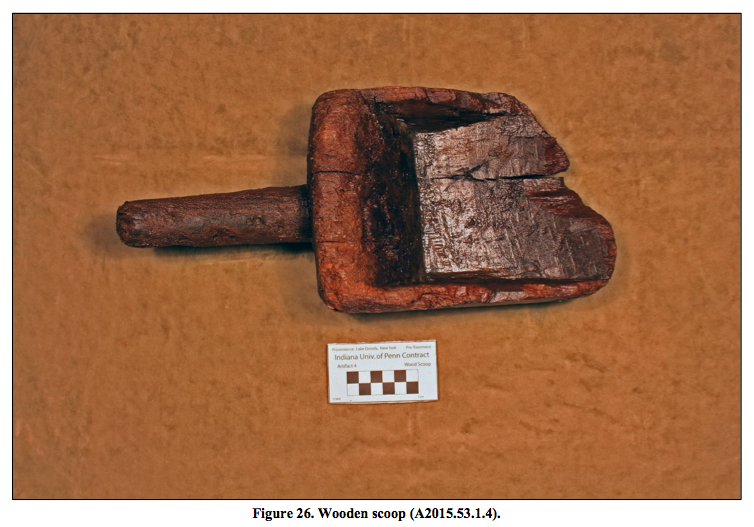 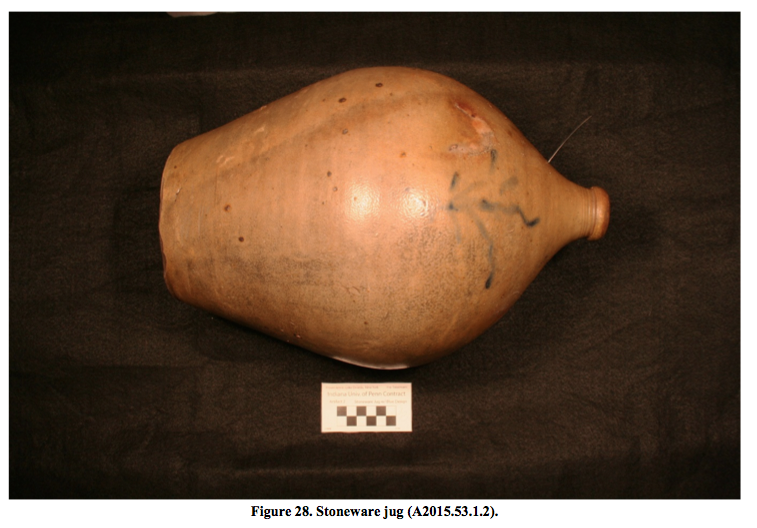 When all the documentation was completed, we recovered the vessel to its original benchmark.

This was the best way to protect the site from any possible decay.

This is the first identified archaeological example of this vessel type.  The shipwreck embedded in the bottom of Oneida Lake is the remains of a 62.5-foot long, 10-foot beam, flat-bottomed boat with a mast situated in its forward third.  The hull remains closely match the historical descriptions of a Durham boat.  The likelihood that this shipwreck is the remains of a Durham boat is bolstered by the presence of wooden artifacts two setting poles were recorded near the middle of the vessel.

Based on the investigation, the shipwreck appears to be the remains of a 62.5-foot long Durham boat.

This has been one of the most important projects I have ever undertaken and one of the most rewarding.  I’d like to thank Susan Anagnost, SUNY College of Environmental Science and Forestry, she identified the wood samples, and Carlton Brett (University of Cincinnati) he identify the origin of the stone cargo.

The stone was identified as a silty dolostone. This type of stone is associated with the Camillus Formation that occurs within a band of Silurian-aged rock extending across west central New York and immediately south of Oneida Lake.

Special thanks out to Ben Ford, Assistant Professor, Department of Anthropology Indiana University of Pennsylvania.

Without Ben’s help I may never have gotten this project off the ground.